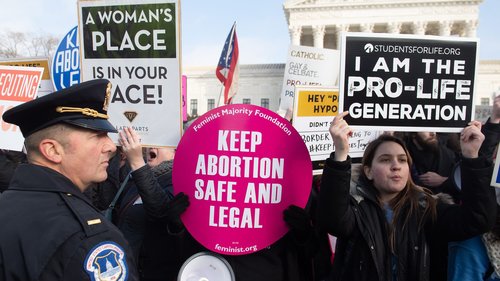 The near-total ban on abortions signed into law in Alabama on Wednesday is the most restrictive abortion legislation in the country, but the state is not alo...

The near-total ban on abortions signed into law in Alabama on Wednesday is the most restrictive abortion legislation in the country, but the state is not alone in trying to put limits on the procedure.

Spurred by Brett Kavanaugh's appointment as the fifth conservative vote on the Supreme Court, anti-abortion activists have moved to pass bills restricting abortion across the country.

These laws may be unenforceable because of the Supreme Court's Roe v. Wade decision that legalized abortion in all 50 states. But abortion opponents are hoping that the legal challenges will serve as a vehicle for the Supreme Court to eventually overturn the Roe ruling.

Here's a look at which states are joining in this legal effort:

On Tuesday, Alabama legislators passed a bill banning abortions with very limited exceptions: 'to avoid a serious health risk to the unborn child's mother,' if the 'unborn child has a lethal anomaly' and if the woman has an ectopic pregnancy.

An amendment to exempt rape and incest victims failed to pass. The law calls for doctors who perform abortions to be treated as felons and face up to 99 years in prison.

Republican Gov. Kay Ivey signed it into law Wednesday, saying the law 'stands as a powerful testament to Alabamians' deeply held belief that every life is precious and that every life is a sacred gift from God.' But she acknowledged that political considerations played a role in the bill's passage.

'Many Americans, myself included, disagreed when Roe v. Wade was handed down in 1973,' she said. 'The sponsors of this bill believe that it is time, once again, for the U.S. Supreme Court to revisit this important matter, and they believe this act may bring about the best opportunity for this to occur.'

Aside from Alabama, multiple states have passed so-called 'heartbeat' bills that ban abortions after a fetal heartbeat can be detected. That can be as early as six weeks into a pregnancy, before many women even know that they are pregnant.

Mississippi Gov. Phil Bryant signed a 'heartbeat' bill in March. Exceptions are to prevent a woman's death or her serious risk of impairment.

'The heartbeat has been the universal hallmark of life since man's very beginning,' Bryant said in an address before signing the bill.

Ohio Gov. Mike DeWine signed into a heartbeat bill in April, a day after the state House and Senate passed the law. Similar legislation was vetoed by former Gov. John Kasich before he left office.

Georgia Gov. Brian Kemp signed a bill last week that would ban abortions if a fetal heartbeat can be detected. The American Civil Liberties Union has said it will challenge the law in court.

Current Georgia law allows women to undergo abortion procedures up to their 20th week of pregnancy. The new law would generally ban abortions after a fetal heartbeat is detected and takes effect on January 1, 2020.

Kentucky passed a 'heartbeat' bill in March, but a federal judge stopped it from being enforced.

Arkansas Gov. Asa Hutchinson signed a bill in March that bans abortions after 18 weeks into a pregnancy -- six weeks before the standard set by Roe v. Wade -- except in medical emergencies and in cases of rape or incest.

Utah similarly passed a law that bans abortion after 18 weeks gestation, but the law was blocked by a federal judge in April, CNN affiliate KSL reported. The state and defendants agreed to the injunction and Salt Lake County District Attorney Sim Gill, a defendant in the case, said he won't enforce the law, KSL reported.

In Iowa, Republican Gov. Kim Reynolds signed 'heartbeat' legislation in May 2018, but a state judge struck down the law this January.

The judge wrote in his decision that defenders didn't identify a compelling reason for the ban. Reynolds said she was disappointed by the decision but decided not to appeal the judge's decision because she saw 'no path to successfully appeal the district court's decision or to get this lawsuit before the US Supreme Court.'

The bill is known as the 'Missouri Stands for the Unborn Act.' It bans abortions after a heartbeat is detected, and it allows exceptions for medical emergencies but not for pregnancies caused by rape or incest. The bill must pass the state House before it goes to Republican Gov. Mike Parson's desk.

In Louisiana, a fetal heartbeat bill passed House and Senate committees on Wednesday with bipartisan support. Cory Stewart, the communications director for the House, told CNN that the bill will go back to the House floor next week for a final vote. If passed, the bill would go to Gov. John Bel Edward's office for his signature.

In Florida, a fetal heartbeat bill was introduced and failed. The sponsor, Rep. Mike Hill, plans to reintroduce it next year, CNN affiliate WSVN reported.

At the same time, states controlled by Democrats have moved to add abortion protections.

New York passed a law in January that protects some late-term abortions, saying they can be performed after 24 weeks of pregnancy if the fetus is not viable or when necessary to protect the mother's life.

The law, passed on the 46th anniversary of Roe v. Wade, removes abortion from the criminal code and protects doctors or medical professionals who perform abortions from criminal prosecution.

'With the signing of this bill, we are sending a clear message that, whatever happens in Washington, women in New York will always have the fundamental right to control their own body,' Gov. Andrew Cuomo said.