Why some health enthusiasts are drinking ginger 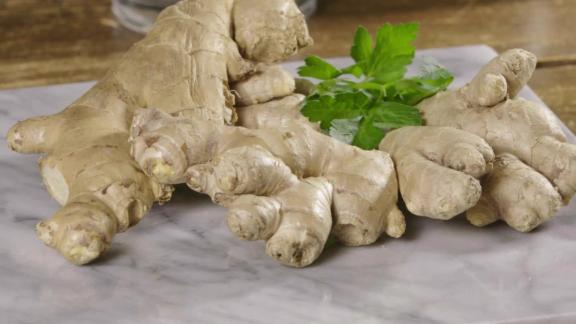 A growing body of research shows that ginger root can have health benefits. CNN Health writer Jacqueline Howard shares ways to add ginger to your diet.

You may use it to add spice to a meal or steeped in a hot tea, but ginger has become a growing area of interest when it comes to health benefits.

Research has shown that ginger can help calm symptoms of an upset stomach, including nausea and vomiting, and even play a role in relieving pain.

'It's most commonly known for helping ease digestive issues like nausea,' said Kelly LeVeque, a nutritionist based in Los Angeles and author of the book 'Body Love.'

Yet 'there is plenty of research that points to the health benefits of ginger as well; studies have shown that it's an anti-inflammatory food and acts as an antioxidant in the body,' she said.

One study, published in the journal Pain Medicine in 2015, reviewed seven randomized controlled trials to find evidence suggesting that consuming ginger powder in the first few days of a menstrual cycle might help relieve period pain.

A small study published in The Journal of Pain in 2010 found that consuming either raw or heated ginger was associated with an up to 25% reduction in soreness after exercise, compared with a placebo.

'I think ginger is fascinating,' said Dr. Eddie Fatakhov, a physician and nutritionist at the Center for Internal and Integrative Medicine in Alpharetta, Georgia. 'It helps soothe the throat. It may help decrease nausea. So if you're not feeling good or you have diarrhea, ginger can actually help with that.'

He added that ginger is similar to the Capsicum family, or chili peppers, in terms of how it can help ease pain. Capsaicin cream, derived from chili peppers, is sometimes used for pain.

Ginger has also been studied as an appetite suppressant, suggesting that it could play a role in weight management.

When it comes to the best way to consume ginger, Fatakhov recommends going for fresh.

'The fresh ginger compound is called gingerol. That's the main ingredient that causes all of those powerful anti-inflammatory properties,' Fatakhov said.

'Then, when I take it and I cook with it, now it switches to zingerone. Zingerone is not as powerful,' he said. 'So if the question is, is it worth eating ginger fresh or cooked? You're going to lose a lot of the properties if you're cooking it. So I would say fresh is best. The second best would be if it's powdered or ground as a spice.'

How can you incorporate ginger into your diet? Try drinking it.

Fatakhov recommended trying a certain cozy drink. Golden milk or haldi doodh -- sometimes called turmeric tea or turmeric latte -- has recently been called 'the trendiest hot drink,' but it has actually been around for centuries. The traditional Indian drink has origins in Ayurveda, an ancient approach to medicine and wellness.

Fatakhov makes his version of the drink with flaxseed milk and several spices: turmeric, cinnamon, cardamom, ginger and a pinch of black pepper. Add in a small ashwagandha root, vanilla bean, spicy melted dark chocolate and a pinch of pink Himalayan salt. Cook all ingredients in a saucepan, simmer and cover for 10 minutes. Then strain and sweeten with honey if desired. Bon appétit!

Some ginger fanatics might also enjoy drinking sliced fresh ginger in their water or tea.

'You place the ginger in hot water and let it steep, like you would with a tea bag. Drinking ginger steeped in hot or cold water will give you some of the same health benefits as when you add it as a spice to your food or blended into a smoothie,' LeVeque said.

'Another way to incorporate it into your diet is to add into soups,' she said. 'It pairs really well with a pureed veggie soup, like carrot soup. It also offers a nice twist if you add a slice of the root to your traditional warm lemon water in the morning.'