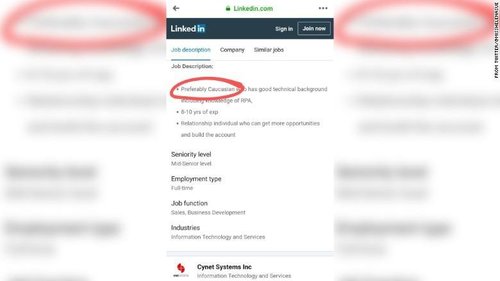 A tech company is under fire for a job listing that described desired applicants as "preferably Caucasian."Information technology staffing and recruit...

A tech company is under fire for a job listing that described desired applicants as "preferably Caucasian."

Information technology staffing and recruiting company Cynet Systems apologized for the job listing, which was spotted last week by Twitter users. The job ad, which has been removed, was posted on sites including LinkedIn.

Helena McCabe posted a screenshot of the job listing on Twitter with the "preferably Caucasian" caveat circled, asking the company, "How could you POSSIBLY think that's okay?"

The company, based in Sterling, Virginia, apologized a day later on Twitter for the "anger & frustration caused by the offensive job post."

"It does not reflect our core values of inclusivity & equality," the tweet said. "The individuals involved have been terminated. We will take this as a learning experience & will continue to serve our diverse community."

Federal law and policy prohibit employment discrimination on the basis of race or color. It is illegal to discriminate against a job applicant or an employee "because of the person's race, color, religion, sex, (including pregnancy, gender identity, and sexual orientation), national origin, age (40 or older), disability or genetic information," according to the Equal Employment Opportunity Commission.

"Both of our owners are Indian-Americans, our workforce is over 60% minority, and we are certified as a diversity supplier by the National Minority Supplier Development Council," the statement continued.

The company is working to "ensure this can't happen again," Mayur said.