3 men invited a widow to sit with them when they saw her eating alone. Their Facebook post went viral. 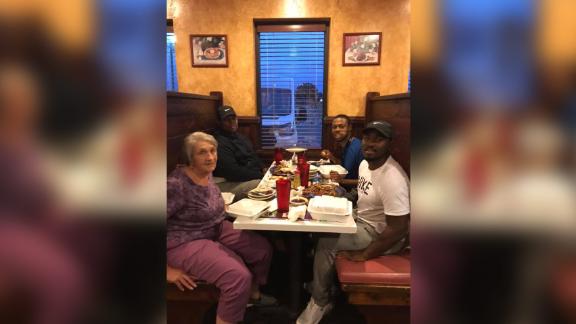 Three men at a restaurant in Alabama asked if they could join an elderly woman sitting alone for dinner. Their heartwarming photo together then went viral.

Jamario Howard was sitting with his friends Jamychol and Tae at a barbecue joint in Oxford, Alabama, waiting for food, when he noticed an elderly woman sitting alone.

"My first thought was 'dang I'd hate to have to eat alone,'" he told CNN. So he went over and asked her if he could sit with her.

The woman said yes, and after they talked for a while Howard found out she had lost her husband and the day after would have been their 60th anniversary.

"I instantly gave my condolences and asked her to come eat with us," Howard said. "She was excited to do so."

Howard shared a picture of the heartwarming moment, which happened April 18, on Facebook. It went viral with more than 44,000 shares.

"The point in this is always be kind and be nice to people. You never know what they are going through. This woman changed my outlook on life and how i look at other people," he wrote in a post accompanying the picture.

Howard said the woman's name is Eleanor and the four talked about "everyday life, sharing stuff about each other" while eating BBQ and fish.

"Our actions were truly from the goodness of our hearts," Howard said.