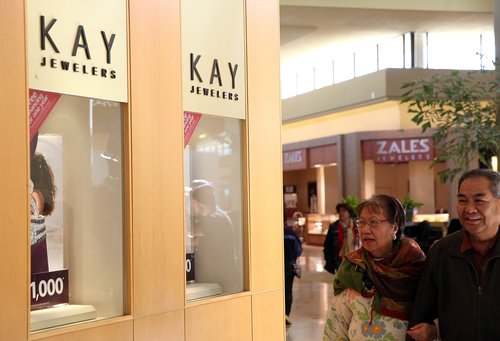 One of America's largest j...

One of America's largest jewelry store chains is under scrutiny over allegations it paid male workers more than their female counterparts and allowed a workplace culture that enabled sexual harassment and abuse of power.

Signet Jewelers, which owns Kay Jewelers, Zales and Jared The Galleria of Jewelry, is the focus of a newly published story in the New York Times Magazine. The author, Taffy Brodesser-Akner, interviewed employees about the company's culture from the1980s to the mid 2000s and examined a "pay-and-promotions" class-action lawsuit against Signet that at one point included 70,000 women. The lawsuit is still unresolved.

The Times report said the company promoted "a system in which men were consistently paid more than women and promoted more quickly" and alleged the hiring system encouraged sexism. Former employees told the magazine about a "good old boys" culture that started with the C-suite. "The company culture oozed downward onto regional vice presidents and the district managers and even the store managers," the report said.

In a statement to CNN Business, the company said it's "disappointed that The New York Times decided to publish an article primarily based on decades-old allegations, and we believe casts our company unfairly."

The Times story details dozens of allegations by former Signet employees. Dawn Souto-Coons had worked for the company for nearly 14 years when in 2005 she first hired an attorney and filed a report alleging sex discrimination in her Jared store in Florida. Souto-Coons, the store's assistant manager, said for four years she had been passed over for the manager position even though she says the company had promised her the job.

She wasn't given the job "when the manager left for training to be a district manager; not when that man was replaced by a man who had just two years of experience at another jewelry store along with a few years of nonjewelry experience at a Men's Wearhouse."

She also discovered through the store's payrolls that the male workers were making more than the women.

"The women's hourly wages averaged $10.39, and the men's averaged $13.40 — so that on average, a woman working a 30-hour workweek for 52 weeks each year would make $16,208.40 before bonuses, while a man working the same amount would make $20,904," writes Brodesser-Akner,citing Souto-Coons. "The men did not have more experience, nor were they quantifiably better salespeople."

The culture of sexism and gender pay inequity was prevalent throughout Signet and wasn't limited to one store, the New York Times report says. Other employees also spoke to the Times about similar issues.

Some of the allegations focused on Mark Light, Signet Jewelry's former CEO who retired in 2017 for "health reasons."

In a court filing, he was "observed by multiple witnesses at company meetings being entertained by female managers, in various states of undress." Light, along with two other regional vice presidents, is accused of having "sex with women employees and conditioned women's success at Sterling upon acceding to such demands, an expectation attributed to other male executives as well."

Light did not respond to the Times' request for comment. CNN Business also reached out to Light, but has not heard back. He was replaced by a female CEO, Gina Drosos, in 2017.

The allegations against the company extend to sexual assault, with stories of "several" rapes, the report says.

The company, in its statement to CNN Business, dismissed claims of widespread gender pay bias.

"Signet is a recognized leader among companies for gender diversity, with women making up 74% of store management positions and full gender parity in both the C-Suite and Board of Directors," said David Bouffard, Signet's VP of Corporate Affairs. "Under the leadership of our CEO Gina Drosos, we are undeterred in our ongoing mission to champion diversity and inclusion as a strategic priority and in our multi-year business transformation plan."

This was not the first time Signet has faced accusations about its culture. A 2017 story from the Washington Post reported the company, its former CEO and other executives "presided over a corporate culture that fostered rampant sexual harassment and discrimination," according to arbitration documents obtained by the newspaper.

Bouffard also told the Washington Post that company officials "have thoroughly investigated the allegations and have concluded they are not substantiated by the facts and certainly do not reflect our culture."

Signet has also previously reached settlements with employees who accused the company of gender discrimination when it comes to salary and promotions.