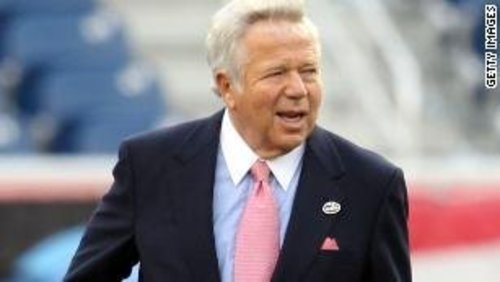 Palm Beach County Judge Leonard Hanser temporarily sealed the video based on Kraft's fair trial rights, and ruled that it can be released once a jury is sworn, the case is resolved via plea agreement or the prosecutors decide they no longer wants to pursue the charges.

Hanser said that while the underlying charge in the case is only a misdemeanor, it 'places in sharp contest issues fundamental to society' -- including the media's First Amendment rights and the defendant's Sixth Amendment right to a fair trial.

'A seventy-eight-year old man walks into a day spa and, in addition to receiving conventional spa services, he allegedly engages in illegal sexual activity,' Hanser wrote in his ruling. 'That seems like a rather tawdry but fairly unremarkable event.'

He added, 'But if that man is the owner of the most successful franchise in, arguably, the most popular professional sport in the United States, an entirely different dynamic arises, especially if the encounter is captured on videotape, and the incident is the focus of much media attention and pre-trial publicity.'

Hanser stated that he may reconsider his decision after a suppression hearing set for Friday.

Kraft's lawyers have maintained that releasing the video would violate his constitutional rights and hamper his chance for a fair trial.

Kraft and other defendants have pleaded not guilty to misdemeanor charges based on what authorities describe as evidence collected from the recordings and other surveillance methods.

The ruling came in response to a court motion filed after someone apparently attempted to sell the video.

The motion filed last Thursday by attorneys representing the two women accused of running the Jupiter spa that Kraft is accused of patronizing, accuse law enforcement of violating a temporary protective order by leaking the video.

Attorneys cited a report published last week on a celebrity news website that claimed it was 'recently contacted by a party who claimed to have obtained portions' of the video.

The Palm Beach County State Attorney's Office had said in court documents it would release video showing Kraft and 24 other men charged after a monthslong, multijurisdictional sting.

Meanwhile, one of the women who allegedly performed sex acts on Kraft and other men at the spa has been charged with prostitution, according to online records from the Palm Beach County Sheriff's Office.

Mingbi was arrested on April 11 and charged with one count of deriving support from prostitution and eight counts of offering to commit prostitution.

Mingbi appeared in court Tuesday morning and was to be released on $5,000 bond, provided she also surrenders her passport and doesn't return to work in the spa or massage industry. It was not immediately clear whether she had an attorney.

Hundreds of people were charged in the sting involving several massage parlors and day spas in Florida. Kraft faces two misdemeanor counts of soliciting prostitution. He has pleaded not guilty and requested a jury trial.

Prosecutors offered to drop the charges in exchange for fines, community service and an admission that he would be found guilty if he went to trial, but a source familiar with the case told CNN that Kraft would not accept the deal.

A class-action lawsuit accuses authorities of illegally videotaping customers getting massages at the same Florida spa where Kraft and others allegedly paid for sexual services.

The lawsuit was filed on behalf of an unidentified John Doe, who was not charged with a crime for patronizing the Orchids of Asia Day Spa from January 18 to 22, while surveillance cameras were rolling inside the spa.

More Hoosiers at home: More trash to pick up