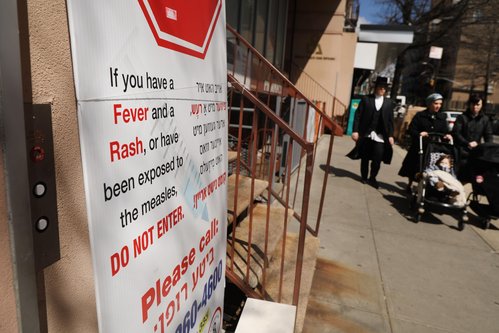 Michigan health officials confirmed the measles outbreak in Oakland County is linked to the ongoing outbreak in New York.

Lynn Sutfin, public information officer for the Michigan Department of Health and Human Services, told CNN that a male individual from New York traveled to Southeast Michigan by vehicle.

"He was unknowingly contagious with the measles during his visit here. All 38 other cases of measles in Southeast Michigan can be linked to this individual," she said.

State health officials have reported 39 cases from this outbreak. (There is an unrelated case of measles in Washtenaw County, Michigan, which is linked to international travel.)

The ongoing outbreak in ultra-orthodox Jewish neighborhoods in New York began in October when, according to health officials, an unvaccinated child became infected with measles while visiting Israel.

"Since then, there have been additional people from Brooklyn and Queens who were unvaccinated and acquired measles while in Israel. People who did not travel were also infected in Brooklyn and Rockland County," the New York City Department of Health and Mental Hygiene website says.

On Monday they added that two people contracted the illness from the UK and one from Ukraine. According to the World Health Organization, Ukraine has reported 72,000 cases of measles in the last 12 months, the highest of any country.

In all, more than 500 cases of measles have been reported in New York as part of this outbreak -- 332 of them since January with more than 40 new cases identified in the last week.

The Rockland County, New York, health commissioner announced new guidelines Tuesday morning for people who have a laboratory-confirmed case of measles, those identified by health investigators as having been exposed to measles and those who are under 18 and unvaccinated.

All people in these categories will be issued an order prohibiting them from leaving their house and going to any place of public assembly, both outdoor and indoor, for up to 21 days. Those found in violation of this rule will face a $2,000 a day fine. Parents are responsible for compliance on behalf of their children.

Commissioner of Health Dr. Patricia Schnabel Ruppert noted that, as of April 15, Rockland County has administered 1,760 vaccinations since an emergency was declared three weeks ago.

Last month, County Executive Ed Day banned unvaccinated people under age 18 from public places, saying it was an "extra, necessary step to fight back" against the disease. In early April, a judge issued a restraining order to block the county from enforcing the ban, a decision Rockland County has since appealed.

County Attorney Thomas Humbach said Tuesday that "the emergency declaration is issued on a statute that does not have a lot of precedent and case law behind it. However, the powers of the commissioner of health are very strong."

On Tuesday, following announcement of the new Rockland County measures, Day said, "We will re-strategize at every opportunity. We cannot afford to wait around for the decision of the court." He said Rockland County's measles outbreak, which includes contact tracing for each case of infection, costs taxpayer dollars, and the negative attention that comes with media exposure "will cost us money, also." He estimates the county is looking at costs approaching $2 million.

"To say we are overreaching flies in the face of facts, history and most importantly common sense," Day said. "In 2017, measles killed 110,000 people worldwide mostly children under age five. We have had five cases go to the intensive care unit. Need we wait for someone to die?"