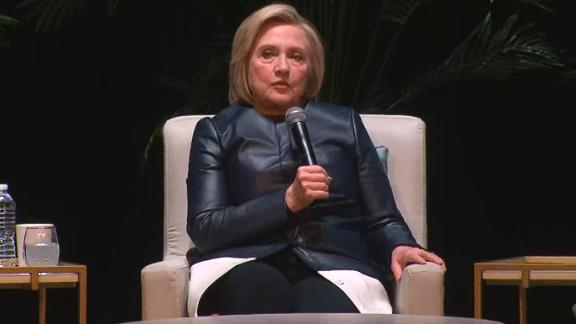 While speaking to a crowd in New York, Hillary Clinton said that Julian Assange -- whose organization, WikiLeaks, played a damaging role in her 2016 electoral defeat -- needs to "answer for what he has done."

Hillary Clinton said Thursday that Julian Assange -- whose organization, WikiLeaks, played a damaging role in her 2016 electoral defeat -- needs to "answer for what he has done."

Assange was arrested earlier Thursday by British police at the Ecuadorian Embassy in London on a US extradition warrant, bringing his seven-year stint there to a dramatic close. He was arrested on charges that he skipped bail in the UK in 2012 and at the request of US authorities, London's Metropolitan Police said.

Speaking at an event at the Beacon Theater in New York with her husband, former President Bill Clinton, the former secretary of state was asked if she cared to comment because she has "some familiarity with the work of Mr. Assange."

During the 2016 campaign, WikiLeaks disseminated the contents of internal communications stolen from the Democratic National Committee and the Clinton presidential campaign. The Justice Department said Thursday that Assange has been indicted on a single charge of conspiring to steal military secrets with Chelsea Manning, the former Army intelligence analyst who supplied thousands of classified documents to WikiLeaks.

"I think it is clear from the indictment that came out it's not about punishing journalism, it is about assisting the hacking of a military computer to steal information from the United States government, and look, I'll wait and see what happens with the charges and how it proceeds, but he skipped bail in the UK," Clinton said.

"The bottom line is he has to answer for what he has done, at least as it's been charged," the former secretary of state told the audience.

"I do think it's a little ironic that he may be the only foreigner that this administration would welcome to the United States," Clinton quipped.