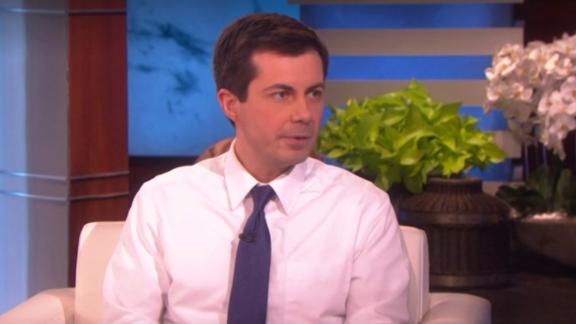 Democratic presidential candidate Pete Buttigieg tells Ellen DeGeneres he has a problem with religion being used as a justification to harm people, particularly in the LGBTQ community.

Vice President Mike Pence hopes South Bend, Indiana, Mayor Pete Buttigieg will offer more than attacks on his religious faith or the character of President Donald Trump as he embarks on his quest for the 2020 Democratic presidential nomination.

Pence and Buttigieg "worked very closely together when I was (Indiana's) governor, and I considered him a friend," Pence told CNN's Dana Bash in an exclusive interview. "And he knows I don't have a problem with him."

When Bash asked Pence whether he agreed with Buttigieg's assertion that God made him gay, Pence replied, "all of us have our own religious convictions. Pete has his convictions, I have mine."

"I hope that Pete will offer more to the American people than attacks on my Christian faith or attacks on the President as he seeks the highest office in the land," Pence said, later adding, "he'd do well to reflect on the importance of respecting the freedom of religion of every American."

In the wide-ranging interview that aired Friday on CNN's "New Day," Pence also weighed in on the arrest of WikiLeaks founder Julian Assange Thursday morning and the ongoing controversy over Attorney General William Barr's handling of the Mueller report.

When pressed on his stance on Buttigieg's comments, Pence said, "I think Pete's quarrel is with the First Amendment. All of us in this country have the right to our religious beliefs. I'm a Bible-believing Christian."

Asked whether that includes the belief that being gay is a sin, Pence repeated, "I'm a Bible-believing Christian. I draw my truth from God's word."

Buttigieg -- who previously said that he wished "the Mike Pences of the world" understood that their "quarrels" over his sexuality are "with my creator" -- responded on Thursday to Pence's repeated assertions that his criticisms are faith-based.

"The Justice Department is now seeking extradition and we're going to bring Julian Assange to justice" for being "involved in one of the greatest compromises of classified information in American history," Pence said, adding that the government was working with former Army intelligence analyst Chelsea Manning.

Pence denied that Trump's previously professed support of WikiLeaks was an endorsement of Assange.

"I think the President always, as you and the media do, always welcomes information," the vice president said. "But that was in no way an endorsement of an organization that we now understand was involved in disseminating classified information by the United States of America."

Manning was convicted in 2013 after providing WikiLeaks with classified documents. Trump told a campaign rally in 2016, "I love WikiLeaks," after the hacking site released the stolen emails of Democratic National Committee staffers.

Pence also said the White House was "not concerned at all, not in the least" that there could be politically damaging information in special counsel Robert Mueller's report that Barr has promised to release in the coming days.

"As the attorney general does his job, and provides the report to the Congress and the American people in the appropriate form that respects confidential information, we welcome that," he said.

Pence demurred on publicly releasing the underlying evidence central to the Mueller report, but expressed confidence that Barr would take the appropriate cautions.

"The American people are always entitled to have the facts, but in this case, it's important that we protect grand jury confidentiality. There are very specific rules to protect individuals as the special counsel went about their business," Pence said.

"We're very confident that Attorney General Barr will do this in a way that protects the privacy interests, protects the integrity of the process but gives the American people the information to see that the conclusions of the report were clear -- there was no collusion, no obstruction," Pence added.

Barr said in a letter to Congress that the Mueller report did not establish there was collusion between the Trump campaign and Russia, though multiple members of the President's team had contacts with Russians and later lied about them.

Barr also told lawmakers in the letter that while Mueller did not reach a conclusion on whether Trump had obstructed justice, he and Deputy Attorney General Rod Rosenstein concluded the evidence was not sufficient to establish that the President had done so.