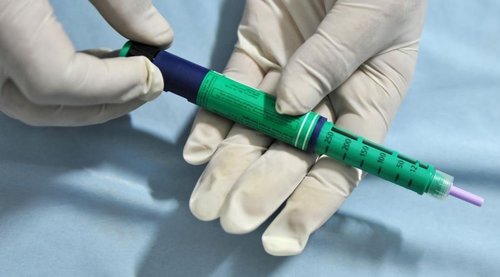 Lawmakers tensed with frustration, some clenching their jaws, while grilling a panel of pharmacy and pharmaceutical company executives about the soaring cost...

Lawmakers tensed with frustration, some clenching their jaws, while grilling a panel of pharmacy and pharmaceutical company executives about the soaring cost of insulin during a congressional hearing on Wednesday. The tension could be felt as some executives fidgeted in their chairs while answering lawmakers' questions.

The hearing, held by the House Committee on Energy and Commerce's Oversight and Investigations Subcommittee on Capitol Hill, was the second this month to examine how fast-rising insulin costs affect diabetes patients across the United States.

Illinois Rep. Jan Schakowsky vehemently said during the hearing that prices of insulin are "curiously close" between manufacturers and "way too high."

"I don't know how you people sleep at night," she told the panel of executives.

"We have the names of people who have died because they couldn't get their insulin," she said. "This is a commitment on the part of the Congress to get drug prices -- particularly life-saving life necessities -- to get those prices under control. ... Your days are numbered."

In response, several executives -- including Doug Langa of Novo Nordisk and Kathleen Tregoning of Sanofi -- pointed to how the health care system is "broken," and they all agreed it was unacceptable that some patients are struggling to afford medications.

As the hearing adjourned, lawmakers made clear that an investigation into the rising cost of insulin and what can be done about the issue will continue.

Companies aim to lower costs; lawmakers argue it's not enough

People with diabetes are prescribed insulin because their bodies either do not produce it (as with Type 1 diabetes) or do not use it properly (as with Type 2 diabetes). There are more than 20 types of insulin sold in the United States, according to the American Diabetes Association.

Ahead of Wednesday's hearing, pharmaceutical company Sanofi announced plans to reduce the price of insulin for qualifying patients to $99 a month for up to 10 boxes of pens or 10-milliliter vials.

The new monthly price for qualifying patients will start in June, according to the company.

"It is unacceptable to Sanofi that some people living with diabetes are struggling to pay for their insulin, so we have moved to act creatively and aggressively to help address affordability and access needs," Michelle Carnahan, head of North America Primary Care at Sanofi, said in the announcement.

"By giving those who require both long-acting and/or mealtime insulins or use more than one box of pens or one vial per month access to their insulins for one flat price, we aim to help limit the burden on the individuals who have high out-of-pocket costs at the pharmacy counter," she said.

US Senate Finance Committee Chairman Chuck Grassley of Iowa, who helped launch a bipartisan investigation into insulin prices in February, called the move "a step in the right direction" in a written statement Wednesday.

"But like Cigna's announcement on insulin prices last week, this raises a lot of questions. Why was Sanofi charging so much more before this announcement? What took them so long to offer the price reduction?" he added. "It shouldn't take months of bad press, persistent public outcry and increasing congressional scrutiny to get a company to charge a fair price. That's not how a functioning marketplace works."

Health insurer Cigna said last week that it's launching a program that will cap out-of-pocket expenses at $25 for a 30-day supply of insulin. Last year, patients paid an average of $41.50 a month out of pocket, including deductibles, copays or coinsurance, for the lifesaving diabetes drug, according to the company.

Its Patient Assurance Program will be available to members of participating nongovernment-funded pharmacy plans managed by Express Scripts, including Cigna and other plans. Cigna acquired Express Scripts, the largest US pharmacy benefit management company, in December.

"In most cases, people who use insulin will see lower out-of-pocket costs without any increased cost to the plan," the company said.

'A matter of life and death'

Also last week, the US Food and Drug Administration announced that it intends to bring competition to the insulin market as a way to lower prices. Commissioner Dr. Scott Gottlieb said the agency would change how insulin is regulated in order to enable products that are biosimilar to, or interchangeable with, insulin to come to market.

"Access to affordable insulin can be a matter of life and death for Americans with diabetes. Insulin is a critical hormone that regulates sugar metabolism," Gottlieb said in the announcement.

"But access to this critical drug can be increasingly difficult for these Americans. Insulin list prices regularly increase by double digits annually," he said. "Driving down drug prices requires a comprehensive approach. But one impactful route is through competition. This is particularly true following the introductions of generics, especially when there are three or more generic competitors -- which has been shown to bring down prices more sharply than with only one or two generic competitors."

In March, pharmaceutical company Eli Lilly announced plans to sell a cheaper generic version of its rapid-acting insulin Humalog. At half the price of Humalog, the generic insulin lispro will carry a list price of $137.35 per vial, the company said, or $265.20 for a pack of five pens. Brand-name Humalog will remain on the market.

Colorado Rep. Diana DeGette, chairwoman of the Oversight and Investigations Subcommittee, said at Wednesday's hearing that Humalog cost only $35 a vial in 2001 and that the price increased even though the drug formulary remained the same.

"Let's not kid ourselves that the generic equivalent of this is really any cheaper," she said shortly before the hearing adjourned.