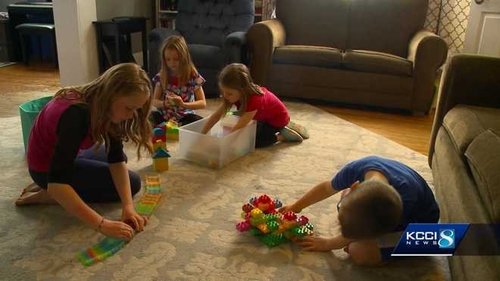 In early December, Chelsea and Anthony White were on a date in the Twin Cities when their oldest daughter, Madelyn, called them after the babysitter fell asleep with blood coming out of her mouth.

Madelyn was with her four younger siblings at the family's Centerville home. She saw their babysitter, Caitlin Rogers, sitting in a chair in the living room.

Chelsea White told her daughter to hang up and call 911.

Madelyn told the dispatcher, "We have a babysitter, and she fell asleep, and she is spitting out blood, and she won't talk to us."

In audio of the 911 call, Madelyn could be heard asking the babysitter, "Are you OK?"

"It was sheer panic," Chelsea White said. "I felt completely helpless. I pulled over on the side of the road, because what do you do?"

At that point, Madelyn said she put her trust in the 911 operator to get her through the most difficult conversation of her life.

"Can you tell if she's breathing?" the dispatcher asked.

Madelyn also kept her younger siblings calm throughout the ordeal.

You can hear Rogers' voice during the 911 call, saying, "Why are you crying, babe?"

It was later determined that Rogers had a seizure, the first time it's ever happened. She told KCCI that doctors don't know what caused it, but she's now on medication.

Rogers said she doesn't remember much from the incident, but she's thankful for Madelyn's brave efforts.

"I can't explain how thankful I am," Rogers said. "Thank you is not enough for how much I appreciate, not just for her, but her family."

Madelyn's parents said the lessons they taught her when she was younger paid off – she recognized an emergency and acted quickly.

"I tear up every time I hear the audio from that from being proud of her," Anthony White said.

So is the fire department and the city. She received two awards at a recent City Hall meeting: junior firefighter and citizen of the month.

Chelsea White said residents have taken a more active approach in teaching their children what to do in emergencies.