Gillibrand on her past guns record: 'I didn't do the right thing' 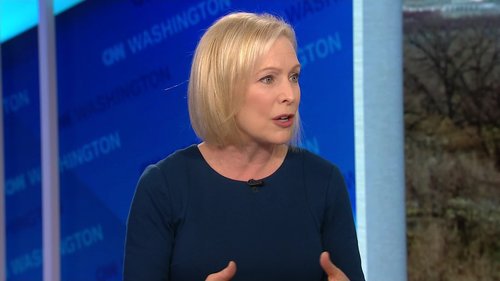 2020 Democratic candidate Kirsten Gillibrand expressed remorse over her past record supporting gun rights and said her admission that she was wrong makes her...

2020 Democratic candidate Kirsten Gillibrand expressed remorse over her past record supporting gun rights and said her admission that she was wrong makes her a "better candidate for president."

"I didn't do the right thing," Gillibrand told CNN's Alisyn Camerota on "New Day" Wednesday. "I mean, I think someone who can't recognize when they're wrong is far more concerning if you can never admit when you're wrong. And not only was I wrong, and not only should I have cared more about gun violence in other parts of my state or other parts of my country, I just didn't."

Gillibrand said that's led her to be "far more thoughtful about all issues, regardless of whether it's an issue for my state or my district."

"I think that makes me a better candidate for president. I think it makes me a better person, because if you don't have an ounce of humility to know when you're wrong, how are you possibly going to govern all of America?" she said.

CNN's KFile reported that Gillibrand signed an amicus brief, submitted to the Supreme Court, that argued for overturning a handgun ban in Washington, DC, and that private gun ownership was a guaranteed right unconnected to service in a militia. Gillibrand, a New York Democrat, fought in defense of gun rights when she represented a more conservative, rural district in the US House.

During her 2008 bid for re-election, Gillibrand campaigned on her pro-gun rights record, touting her "A" rating from the National Rifle Association. The NRA pointed to her support for the amicus brief in its endorsement of her, CNN's KFile reported.

After she was appointed to the US Senate in January 2009, Gillibrand shifted from her conservative record on gun rights and by September 2010, her NRA grade changed from an "A" to an "F."

"Ten years ago, when I became US senator, I recognized that I was only focused on the needs of my upstate district, but I really should have been focusing on the needs of everyone," Gillibrand said on CNN's "New Day" Wednesday.