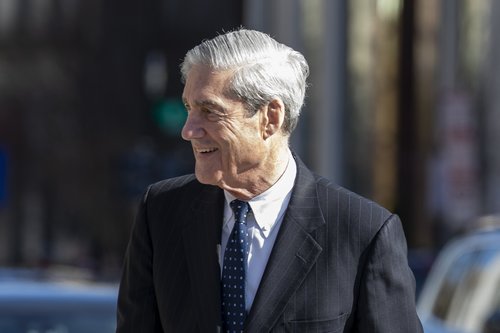 Roughly three weeks ago the special counsel's team told Attorney General Bill Barr and Deputy Attorney General Rod Rosenstein that Robert Mueller would not be reaching a conclusion on whether President Donald Trump obstructed justice, according to a source familiar with the meeting.

The source said that conclusion was 'unexpected' and not what Barr had anticipated.

Barr released a four-page summary on Sunday of Mueller's principal conclusions, writing that the special counsel 'did not draw a conclusion -- one way or another -- as to whether the examined conduct constituted obstruction.'

'Instead,' Barr explained, 'for each of the relevant actions investigated, the report sets out evidence on both sides of the question and leaves unresolved what the Special Counsel views as difficult issues of law and fact concerning whether the President's actions and intent could be viewed as obstruction.'

News of Mueller's decision to punt on the crucial question of whether the President's actions amounted to obstruction of justice was particularly notable given that he never received a sit down interview with Trump to assess his state of mind, despite having considered issuing a subpoena for his testimony.

And whether expected by Justice officials or not, the new timeline now emerging means that Barr had a head start on developing his own analysis on obstruction of justice well before Mueller delivered his confidential report to the attorney general on Friday. Rosenstein's office has also been heavily involved in overseeing the investigation since he appointed the special counsel in May 2017.

Barr explained in his summary to Congress that after reviewing Mueller's report and consulting with Rosenstein, he concluded that based on the evidence developed during the special counsel's investigation and federal charging guidelines, the Justice Department couldn't make a prosecutable case against the President for obstruction. And that conclusion was reached without regard to the Department's generally recognized policy of not indicting a sitting president.

CORRECTION: This headline has been updated to reflect that the special counsel's team told Attorney General Bill Barr and Deputy Attorney General Rod Rosenstein that Robert Mueller would not be reaching a conclusion on obstruction of justice.