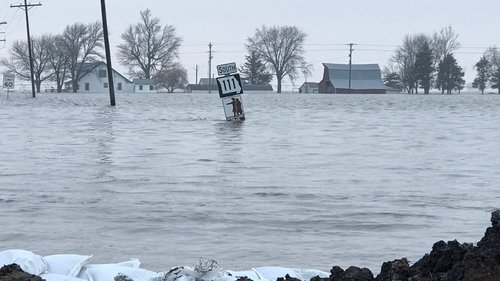 The National Weather Service issued a Flash Flood Warning shortly before 10:30 a.m. after the levee gave with floodwater expected to “quickly inundate the town. Officials are asking residents to immediately evacuate the town.”

With water still rising in the area by mid-afternoon, sandbagging efforts had been abandoned, according to the Holt County Sheriff's Office.

The city's water plant remained operational, but troopers with the Missouri State Highway Patrol’s Water Patrol were assisting officials with shutting off natural gas lines in the area.

KCP&L also announced service disruptions in northwest Missouri, including areas near St. Joseph, Missouri. Power will not be restored until the water recedes and the local power grid can be inspected to ensure its safety.

“Electrical safety in flooding creates specific concerns because electric current travels through water,” a statement from KCP&L said. “Safety of the public, first responders and our employees is our top concern.”

Stay away from power lines and pad-mounted transformers in flooded areas.

Do not walk in standing water or venture into areas of debris, since energized and dangerous power lines may not be visible.

Do not ride watercraft near power poles and power lines, as they too can be energized and deadly.

Also by mid-afternoon, levees a few miles south near Fortescue along U.S. 159 highway also were breached, according to the Holt County Sheriff's Office.

Craig and the surrounding area isn’t the first location in northwest Missouri to be evacuated. Parts of Atchison County, which is north of Craig, have been under a mandatory evacuation order since last Friday.

But Craig may be the hardest hit location as the Missouri River spills its banks, fueled by snow melt and other upstream releases.

English Landing Park and Platte Landing Park in Parkville, Missouri, have been closed due to weekend flooding.

“The only main concerns that we would have right now would be once the water recedes is what type of repairs we'll have to do to the parks to get it back up and running,” Parkville Police Chief Kevin Chrisman said.

Crews removed trash receptacles and portable toilets, which could leach contaminants into the floodwaters. Silt, mud and river debris, like tree limbs, may need to be cleaned.

Trees that were submerged will need to be inspected, but the damage isn’t as bad as once expected.

“We are very fortunate here,” Chrisman siad. “We feel for our neighbors to the north all the way up into Nebraska. Unfortunately, they are catching the brunt of it. They are closer to where the water is released. They have a lot of levee breaches, which quite frankly spreads the water out and has prevented us from getting what was initially predicted.”

Chrisman cautioned that conditions can change quickly, so barricades near the river will remain in place and he asks the public to respect them. But he stressed there is no immediate danger and none is expected.

“We are nowhere near getting ready to sandbag or do anything where we need help at this time. I appreciate those inquiries. If we do need help, there's other steps we need to do before we do that.”

Floodwaters aren’t expected to threaten Kansas City, Missouri, which bolstered its levee system after severe flooding in 1993 , but residents may still notice its effects.

“The flooding is causing water treatment challenges for KC Water,” according to a release from the water department for the city of Kansas City, Missouri. “ Due to the changing characteristics of the floodwaters coming down the Missouri River, the source of Kansas City’s drinking water, customers may notice taste and color issues during this time.”

KC Water stressed that its water is continuously monitored and tested, so it remains safe to drink.

Butler man arrested on meth, weapons charges after being pulled over for fake registration

Rep. Greg Pence criticized for racist items sold at his mall in Edinburgh

Walmart used to be a haven for RV parking, but more stores won't allow it