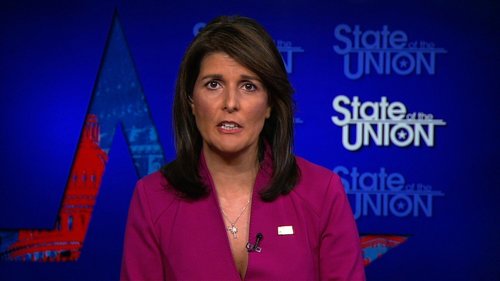 The top Finnish envoy to the United Nations joined a chorus of people slamming Nikki Haley for saying the European nation's health care system is lacking compared to that of the United States.

The incident started when Sen. Bernie Sanders criticized the cost of childbirth in the United States, saying it's about $12,000 compared to $60 in Finland.

"We've got to end the disgrace of our profit-driven health care system and pass Medicare for all," Sanders tweeted.

Haley, who served as the United States ambassador to the United Nations until last year, fired back at Sanders on Wednesday night and indicated Finland's health care is not as popular among its citizens.

"Health care costs are too high that is true but comparing us to Finland is ridiculous," Haley tweeted. " Ask them how their health care is. You won't like their answer."

Following Haley's tweet, Finland's permanent representative to the UN tweeted a series of statements on health care in the nation.

"Finland has a high performing health system, with remarkable good quality in both primary and hospital care. The country also achieves good health status at relatively low level of health spending," Kai Sauer tweeted. He added that the United Nations describes Finland as having the world's third-lowest infant mortality rate and the lowest maternal mortality.

Infant mortality is considered a basic measure of public health for countries worldwide, according to the Centers for Disease Control and Prevention.

In this case, the under-five mortality rate refers to the probability of dying by age 5 per 1,000 live births.

US is ranked poorly among wealthy nations

Despite significantly higher health care spending than Finland, the United States has the worst overall child mortality rate compared with 19 other wealthy nations in the Organisation for Economic Co-operation and Development, according to a study published last year in the journal Health Affairs.

"The US is the most dangerous of wealthy, democratic countries in the world for children," said Dr. Ashish Thakrar, lead author of the study.

And it does not fair well either when it comes to the maternal mortality rate for women. In the US, it's 14 per 100,000 women -- nearly five times higher than Finland, which is three, according to the World Health Organization. The number puts the United States in the company of several nations, including Uruguay and Serbia.

In addition to an enviable health care system, Finland has a lot to celebrate. Just this week, it was named the happiest country in the world for the second year in a row.