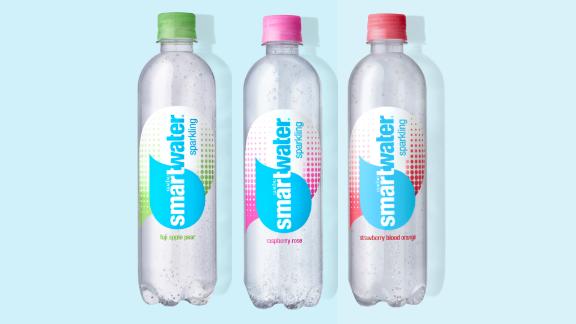 As more Americans are reaching for drinks with lower sugar, sparkling water is on the rise. Coke is keeping up with the trend by rolling out flavored sparkling Smartwater.

Coca-Cola wants to capitalize on America's obsession with flavored sparkling water, so it launched yet another seltzer line, this time from its premium Smartwater brand.

Smartwater began dabbling with flavored sparkling varieties in Europe a few years ago. Now Coca-Cola has its eye on the American market.

American consumers have increasingly sought drinks that have functional elements, like nutritional value or a jolt of caffeine. They also want healthy, low-sugar or sugar-free offerings. Sparkling water ticks a lot of those boxes, and American consumers are buying more of it. Research company Mintel estimated that retail sales of seltzer in the United States more than doubled from 2013 to 2018

Coke is benefiting from the seltzer surge. The company's North American sparkling water sales spiked 19% last year, according to Nielsen data cited by Coca-Cola. Flavored sparkling water is an important part of the trend.

'Unsweetened flavored sparkling water is a dynamic and exciting category as we look at our long-term growth plans,' Brad Spickert, senior vice president of hydration for Coca-Cola North America, said last year, adding that it's 'a huge growth engine.'

But vapor-distilled Smartwater, infused with electrolytes and pitched by celebrity spokeswoman Jennifer Aniston, is a more premium product than Coke's other brands. Flavored versions should help the company compete with the likes of San Pellegrino and Perrier, rather than La Croix or PepsiCo's Bubly.

The company has already rolled out variants of Smartwater, including the unflavored sparkling line, which was announced in 2015. Last year it unveiled two other versions, Smartwater Antioxidant and Smartwater Alkaline. Water with health benefits, like protein or antioxidants, are trending among US Millennials, Mintel noted.

The latest, flavored line of Smartwater 'gives you hydration, it gives you a sparkling essence, it gives you a flavor and it even has a nice smell, an aroma, when you open it,' Nancy Quan, the company's chief technical officer, told CNN Business. 'Those are all really critical to make sure that the consumer is as interested in this as something that's got full sugar.'

New product launches like this one can also help Coca-Cola reach its goal of becoming a total beverage company. It recently acquired UK-based Costa Coffee, which gave it a stake in retail coffee.

Earlier this month, Coca-Cola launched a Odwalla Smoobucha — a smoothie-kombucha drink in three flavors. The company is also testing out a line of non-alcoholic beverages inspired by cocktails, like spiced ginger mule and sangria.