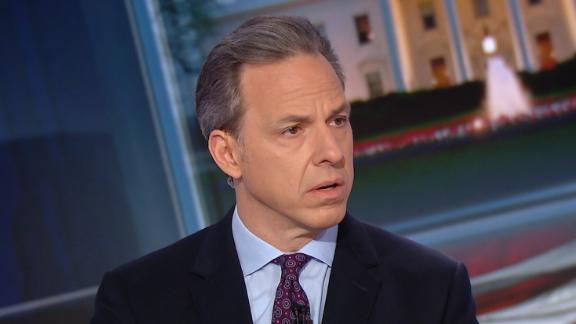 CNN's Jake Tapper fact-checks President Donald Trump's comments that he does not view white nationalism as a rising threat around the world following an attack targeting Muslims in New Zealand.

During a press conference Friday, President Donald Trump was asked if he "see(s) today that white nationalism is a rising threat around the world?" in the wake of the terrorist attacks on two mosques in New Zealand, which left at least 49 dead.

"I don't really. I think it's a small group of people that have very, very serious problems, I guess," the President said. "If you look at what happened in New Zealand, perhaps that's the case, I don't know enough about it yet. They're just learning about the person and the people involved. But it's certainly a terrible thing."

The man charged with murder in the New Zealand attack cited a list of white nationalists who inspired him in his putative manifesto posted online.

Facts First: White nationalism is certainly a rising threat in the US, with plenty of evidence to back it up.

In the past two years there have been a number of high profile incidents involving white nationalists, perhaps most notably the Unite the Right march in Charlottesville, Virginia, in August 2017. One woman was killed and 19 were injured when a speeding car slammed into a throng of counter-protesters.

Last year's shooting at the Tree of Life Synagogue in Pittsburgh claimed the lives of 11 people. Federal prosecutors charged the gunman, an avowed white nationalist, with hate crimes. In February, authorities arrested a Coast Guard lieutenant, an alleged white supremacist, who was planning an attack on several television anchors and elected officials.

The data suggests these are all part of a broader rise in white nationalism across the US.

The Anti-Defamation League (ADL), an organization focused on tracking extremist activity, found last year that white supremacist murders in the US "more than doubled in 2017," with far-right extremist groups and white supremacists "responsible for 59 percent of all extremist-related fatalities in the U.S. in 2017." They were responsible for 20% of these fatalities the year before.

"This attack (in New Zealand) underscores a trend that ADL has been tracking: that modern white supremacy is an international threat that knows no borders, being exported and globalized like never before," ADL CEO Jonathan Greenblatt said in a press release.

ADL also reported that propaganda efforts from white supremacist groups increased by 182% in the US in 2018; causing the number of incidents to jump from 421 the previous year to 1,187.

The Center for Strategic and International Studies, a think-tank based in Washington, DC, reports that "the number of terrorist attacks (in the US) by far-right perpetrators rose over the past decade, more than quadrupling between 2016 and 2017."

White nationalism, supremacism, and far-right extremist attacks and propaganda are on the rise. The President is incorrect in suggesting that these groups do not present a growing threat.

Domestic terrorism -- as a whole -- has seen a recent uptick in the US, with nearly 25 related arrests in the last three months of 2018, an FBI official told CNN. These cases are separate from plots relating to international terrorism investigations, like those involving al Qaeda and ISIS.