Woman dragged, bitten hundreds of times by pack of dogs 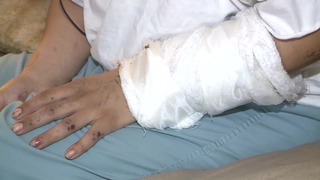 Days into the healing process, the 27-year-old’s body is still a patchwork of a stitches, bandages and injuries — some too graphic to show on television.

Her mother said her daughter had more dog bites than the doctor was able to count. “He said he stopped counting at 200,” said Lisa Ennis.

The attack happened as Ennis’ daughter was walking home along St. Francis County Road 323 Friday afternoon. She said she was surrounded by about 10 dogs that dragged her behind a house, ripping off some of her clothes in the process.

“The first dog jumped up and it got me on the arm, and then they all just flocked,” she said.

The victim said there was no one else around as the attack was happening and that she was helpless to fight back as the pack tore at her flesh.

“I think I made it up one or two more times to get to my phone, and they kept dragging me back behind the trailer so they could eat me. I mean, they were literally eating me alive,” she said.

Her fate seemed sealed until a woman who happened to be driving by heard her screams and was able to scare the dogs away.

A WREG photographer had his own run-in with the dogs while working on this story. One of them snagged his jeans with its teeth, but didn’t pierce his skin as the others stood close and barked.

A family who identified themselves as the dogs’ owners told WREG they knew nothing about the attack and suggested it could have been coyotes. The Sheriff's Office cast doubt on that theory, but said the victim's best recourse is civil action.