Grounding all 737 Max planes could cost Boeing billions of dollars 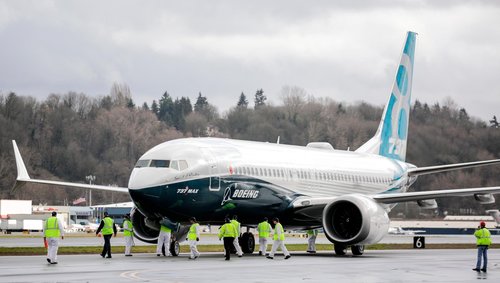 The decision to ground all Boeing 737 Max planes could cost the company billions of dollars.The company said Wednesday it recommended the FAA issue a...

The decision to ground all Boeing 737 Max planes could cost the company billions of dollars.

The company said Wednesday it recommended the FAA issue a temporary operations suspension of all 737 Max planes. Boeing had for days resisted a suspension, even as aviation authorities around the world grounded their 737 Max aircraft following the second deadly crash of a 737 Max 8 plane in less than five months.

The cost of grounding all 737 Max planes could be between $1 billion and $5 billion, according to estimates from Wall Street firms Melius Research and Jefferies.

Both those estimates were based on a three-month grounding. Boeing can afford that cost: It posted record revenue of $101 billion last year, and a $10.6 billion profit. It had forecast even stronger results this year.

Boeing has grounded an entire fleet of planes before. In 2013, Boeing told airlines not to fly their 787 Dreamliners because the planes' batteries were catching fire.

Boeing didn't stop building the 787 planes while it worked to find a solution to the problem. At that time, only 50 Dreamliners were in service, so the cost to Boeing was "minimal," the company said.

Boeing's statement Wednesday did not say what the grounding would mean for its current production plans, but it is likely that it will continue to build planes as scheduled. The costs of grounding all of its 737 MAX jets and halting delivery until April might also end up being minimal to a company the size of Boeing, particularly if it doesn't lose any long-term sales.

One of the bigger costs to Boeing will likely be compensating the airlines that own the 370 grounded planes. Earlier Wednesday the CEO of Norwegian Airlines said that it would be sending a bill to Boeing for the revenues it lost from having 18 of the 737 Max planes it owns grounded.

Boeing maintains its planes are safe to fly, yet Boeing's stock has fallen 12% this week. Boeing CEO Dennis Muilenburg said in a statement Wednesday that the company took the "proactive step" to ground the 737 Max planes "out of an abundance of caution."

"Safety is a core value at Boeing for as long as we have been building airplanes; and it always will be," Muilenburg said. "There is no greater priority for our company and our industry. We are doing everything we can to understand the cause of the accidents in partnership with the investigators, deploy safety enhancements and help ensure this does not happen again."

The FAA and Boeing both say a software upgrade will give pilots greater control over plane in case problems emerge with the planes' safety systems. That fix is due in April.

The 737 Max family of planes is new enough that it doesn't make up a significant portion of airlines' fleets. Southwest has 34 of the 737 Max 8, out of 750 jets it operates. American Airlines has 24 of the planes flying 85 flights daily. United has only nine 737 Max 9 jets. In each case the aircraft make up less than 3% of their capacity.

And since a round of bankruptcies and consolidation earlier in the century left the US industry with only four major carriers controlling about 80% of air traffic, the industry has been enjoying a period of unprecedented and sustained profitability. It has also been a period of great safety. US passenger airlines have had only one passenger die as a result of an accident in the last decade. There have been fatal crashes of cargo planes.

Sunday's fatal crash of an Ethiopian Airlines jet killed all on board. The cause of Sunday's crash is still under investigation. It follows an October crash in which pilots on a Lion Air flight fought an automatic safety system for control of the plane. That crash killed everyone on board.

Boeing faced widespread criticism from lawmakers and aviation experts for its hesitation to ground the 737 Max fleet earlier this week.

"The best time to have [ordered a grounding] was immediately following the Ethiopian Airlines crash," said Nick Wyatt, analyst with GlobalData, on Tuesday. "I don't think they can win either way here."