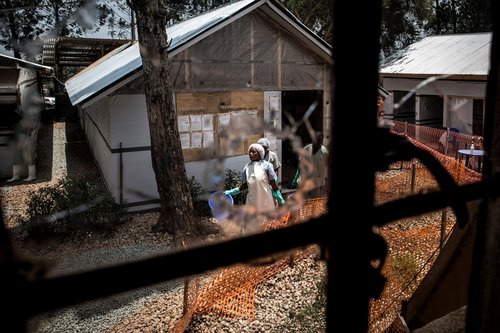 Militants attacked an Ebola treatment center in the Democratic Republic of Congo, killing a police officer as the nation battles a growing epidemic that ha...

Militants attacked an Ebola treatment center in the Democratic Republic of Congo, killing a police officer as the nation battles a growing epidemic that has killed hundreds.

The World Health Organization said a staff member was injured in the Saturday attack by armed groups that targeted the center again last week. WHO Director-General Tedros Adhanom Ghebreyesus was in the nation on a three-day visit and spoke to officials and staff at the center after the attack.

"It breaks my heart to think of the health workers injured and police officer who died in today's attack, as we continue to mourn those who died in previous attacks, while defending the right to health," Tedros said. "But we have no choice except to continue serving the people here, who are among the most vulnerable in the world."

He said some groups are "exploiting the desperation of the situation" during the Ebola outbreak.

"The people of Katwa and Butembo, as in the other communities affected by Ebola, want and deserve a place to receive care and a chance of survival," he said.

Katwa and Butembo are in North Kivu, a province grappling with a long-term conflict and dozens of armed groups causing intermittent violence, according to the World Health Organization. It said it's receiving additional support from the United Nations and local police to protect treatment centers.

"To conquer Ebola, we must strike a delicate balance between providing accessible care, maintaining the neutrality of the response, and protecting patients and staff from attacks by armed groups. These are the dilemmas we face in conflict zones around the world. We are committed to ending the outbreak, and we are committed to improving the health of the people of DRC," Tedros said.

Doctors Without Borders was targeted in an attack in Katwa on February 24 and another one three days later in Butembo, the medical aid organization reported last month.

MSF suspended its activities in Butembo and Katwa but said it would continue Ebola-related activities in other towns in North Kivu and neighboring Ituri province.

The two provinces are among the most populous in the nation and border Uganda, Rwanda and South Sudan.

The nation's current Ebola outbreak started in August. It is the second-deadliest and second-largest in history, topped only by one in West Africa in 2014, when the disease killed more than 11,000 people, according to the WHO.

Ebola first appeared in 1976 and is one of the world's most virulent diseases.

It is transmitted through direct contact with blood or other bodily fluids of infected people, causing fever, severe headaches and in some cases hemorrhaging.