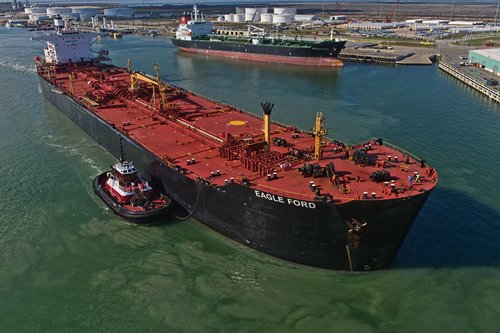 Move over, Saudi Arabia. America is about to steal the kingdom's energy exporting crown.The United States will surpass Saudi Arabia later this year in...

Move over, Saudi Arabia. America is about to steal the kingdom's energy exporting crown.

The United States will surpass Saudi Arabia later this year in exports of oil, natural gas liquids and petroleum products, like gasoline, according to energy research firm Rystad Energy.

That milestone, driven by the transformative shale boom, would make the United States the world's leading exporter of oil and liquids. That has never happened since Saudi Arabia began selling oil overseas in the 1950s, Rystad said in a report Thursday.

"It's nothing short of remarkable," said Ryan Fitzmaurice, energy strategist at Rabobank. "Ten years ago, no one thought it could happen."

The expected breakthrough reflects how technology has reshaped the global energy landscape. Drilling innovations have opened up huge swaths of oil and natural gas resources that had been trapped in shale oilfields in Texas, North Dakota and elsewhere.

Led by shale, US oil production has more than doubled over the past decade to all-time highs. The United States now pumps more oil than any other country, including Russia and Saudi Arabia.

"The shale boom has driven incredible increases in production," said Fitzmaurice. "US production is off the charts."

With ample supply at home, Congress in 2015 lifted the 40-year oil export ban. Overseas oil sales have exploded since then. And the US Gulf Coast is racing to build facilities that can handle surging foreign demand for US crude.

"Excess fossil fuels from America will find plenty of eager buyers in fast-growing Asia," Per Magnus Nysveen, senior partner at Rystad Energy, wrote in the report.

Rystad expects that gap to vanish this year, although Saudi Arabia would keep a comfortable lead as the world's largest exporter of crude oil alone.

The Permian Basin of West Texas has become the epicenter of the shale boom. Technological advances have made it possible for companies to profitably drill at lower and lower prices.

ExxonMobil, which was slow to the shale game, said this week that its soaring production in the Permian Basin can generate an average return of more than 10% — even at just $35 a barrel. Exxon now plans to produce more than 1 million barrels per day from the Permian by 2024 — up nearly 80%.

"Increasingly profitable shale production and a robust global appetite for light oil and gasoline is poised to bring the US to a position of oil dominance in the next few years," said Nysveen.

That dominance means that the United States can increasingly rely on oil pumped at home.

Earlier this year, the Energy Department's statistics division predicted that the United States will export more energy than it imports in 2020. That hasn't happened since 1953.

That has important national security implications. While the United States will still need to import oil to power its economy, it's no longer as beholden to foreign oil as it once was. Meanwhile, China is importing more oil than ever before.

A recent report by Oil Change International warned that new US oil and gas development could unleash the same amount of carbon pollution as almost 1,000 coal-fired power plants. The group called it a "climate catastrophe" — at precisely the worst time.

And just this week, the Solomon Islands was hit with an oil spill caused by a ship carrying hundreds of tons of fuel oil. The oil spill has contaminated waters near a UNESCO World Heritage Site.