Sherrod Brown decides not to run for president 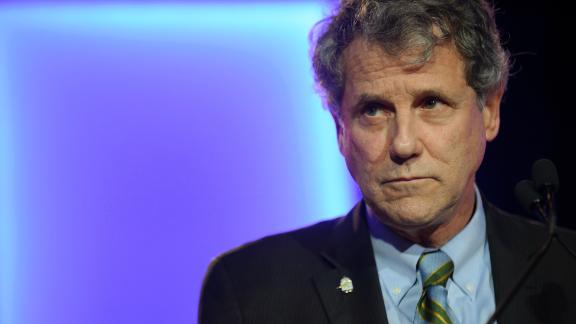 Sen. Sherrod Brown will not run for president in 2020, instead choosing to remain in the US Senate, the Ohio Democrat announced.

Ohio Sen. Sherrod Brown announced on Thursday that he will not run for president in 2020, ending months of speculation that the Democrat would jump into the race to challenge President Donald Trump.

Brown began telling his circle of advisers on Wednesday afternoon of his decision not to run, which took many by surprise, two participants in a meeting told CNN. The team of Brown advisers had mapped out a fundraising and travel plan for a presidential candidacy starting in April.

Brown told his circle of advisers that his listening tours to Iowa, New Hampshire, Nevada and South Carolina helped him see that he wasn't fully committed to the rigors of an uphill primary campaign in a crowded field. Donors were lined up and fundraising events were scheduled, but Brown said he 'wasn't 100% sold,' according to one adviser.

Brown, a liberal populist who has won three terms in Ohio, a state that has been trending Republican in recent years, would have offered Democrats a candidate that could reconnect with voters in the Midwest. In announcing his decision on Thursday, Brown pledged to continue pushing Democrats to focus on the 'dignity of work,' a term that became the senator's trademark during his 2020 exploration.

'Connie and I have spent the last few months traveling around the country to make dignity of work a centerpiece of Democrats' 2020 campaign, and we are so grateful to everyone who has welcomed us into their communities and into their lives,' Brown said, referencing his wife, Connie Schultz. 'We've seen candidates begin taking up the dignity of work fight, and we have seen voters across the country demanding it -- because dignity of work is a value that unites all of us.'

He added: 'It is how we beat Trump, and it is how we should govern. That's why I'm confident it will continue to be a focus for Democrats in 2020, and I plan on making sure that happens.'

In addition to Brown not being fully committed to the rigors of a campaign, the likely candidacy of former Vice President Joe Biden also played into Brown's thinking. But two Ohio Democrats close to Brown said that Biden's possible run was not the determining factor. In the end, they said, Brown was not as fired up about running for the White House as some of his advisers were.

'He's happy in the Senate,' one aide said. 'There are plenty of people running for the White House.'

Following his announcement on Thursday, Brown told CNN that a potential Biden run 'had zero impact on this,' adding that he hadn't spoken to the former vice president.

Brown, in an attempt to explore whether a run for President was possible, launched a 'listening tour' that included stops in Iowa, New Hampshire, Nevada and South Carolina, the four key early voting states in the 2020 primary.

Top Democrats are split about whether Ohio, Brown's home state, will be a battleground in the 2020 election. Following his announcement, Brown told CNN that the state is 'absolutely in play' for the election.

Trump romped in the state in 2016, beating Hillary Clinton by 9 percentage points after the former secretary of state spent considerable time campaigning there.

Brown said on Thursday that he would continue to listen to those concerns from voters and pledged to 'keep calling out Donald Trump and his phony populism.'

'I will keep fighting for all workers across the country. And I will do everything I can to elect a Democratic President and a Democratic Senate in 2020,' Brown said. 'The best place for me to make that fight is in the United States Senate.'

Brown, who declined on Thursday to endorse any of the Democratic candidates, has been outspoken about the idea that a progressive can win the 2020 election as long as they focus on the right progressive issues.

'An outspoken progressive can win -- and win decisively -- in the heartland,' he said during his tour.