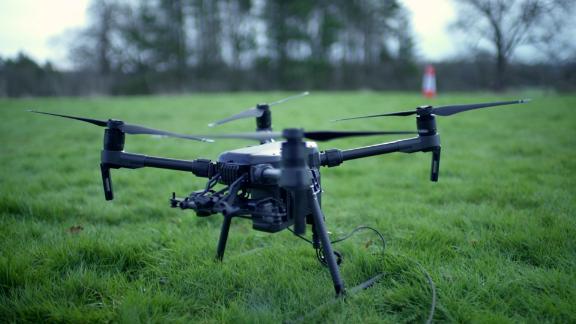 Drone tech company Elistair has invented a giant extension cord that keeps a drone tethered to the ground, but flying for much longer.

Drones have become an increasing nuisance for airports worldwide in recent months, and good solutions to keep them from interfering with flights aren't yet available.

The incident at Gatwick in December proved especially disruptive, impacting the flights of more than 100,000 passengers. In 2017, a drone hit a commercial airplane approaching Quebec City in Canada. The plane landed safely.

Aviation experts fear catastrophic damage or death could result from a drone hitting an airplane. Such an incident could be accidental or motivated by ill will, such as a terrorist attack. A 2017 FAA study found that drones colliding with large aircraft can cause more damage than birds -- a threat the industry has long faced. There's also a business risk. Airlines risk losing millions of dollars from flight delays and cancellations. If air travel becomes more unpleasant, some travelers may switch to other modes like trains or driving.

The problem is urgent and fixes are lacking, according to Chris Oswald, senior vice president for safety and regulatory affairs at the Airports Council International-North America, which represents airport owners and operators.

"One major underlying concern across industry sectors is the lack of tested and fully vetted drone detection and counterdrone systems," Oswald told CNN Business. "That's a big issue on all of our members' minds. What can we do? What are steps we can take to mitigate drone events? How can we be proactive in detection?"

So far there are more questions than answers. Technology like radar, electromagnetic waves and radio frequency interference to detect and counteract drones at airports aren't ready, according to the Federal Aviation Administration. For now, airports are relying on pilots to see and report drones. But it's difficult to confirm these sightings, and human eyesight isn't perfect.

Automated solutions for detecting drones are expensive, may interfere with airports' navigation system and don't always work, according to FAA tests conducted in late 2016 and early 2017. Hovering drones, for example, are hard for the systems to identify. And humans are needed to operate the detection technology and identify false positives. The FAA will be working on another test of the technologies, according to an FAA spokesman.

The FAA hasn't examined technologies designed to counteract rogue drones, such as jamming radio signals or shooting them down with an electromagnetic pulse or physical net. That appears likely to change. An FAA official said earlier this month that taking action against malicious drones is critical and would need to be executed carefully.

"We don't want to create a safety hazard while trying to mitigate a security risk," said Angela Stubblefield, the FAA's deputy assistant administrator for security and hazardous materials safety.

Some airports, such as Dallas-Fort Worth International Airport, are already testing drone detection solutions. A spokeswoman for the airport declined to provide more details.

Drone experts see promise in the remote identification rules that the FAA is developing for drones. Remote identification will require drones to radio their position so that authorities are aware of where drones are flying. However, that won't help with identifying criminals who are intent on avoiding detection.

Someone could build their own drone or hack an existing drone to not make it available for remote identification.

Tim Bean, CEO of Fortem Technologies, is building a radar system to identify drones, even if they don't comply with remote identification.

"That 1% of flyers that want to shut down airports represent 99% of the risk," Bean said.

With COVID-19 recovery near 97%, you should still follow the Stay At Home order