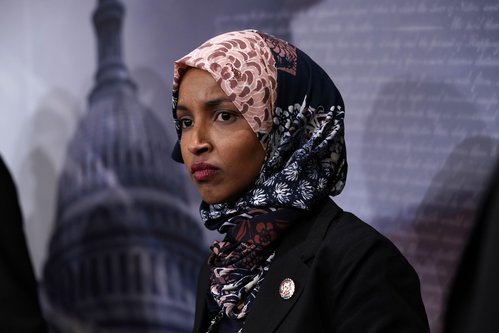 The chairman of the House Foreign Affairs Committee called Friday for freshman Democratic Rep. Ilhan Omar to apologize after insinuating that pro-Israel grou...

The chairman of the House Foreign Affairs Committee called Friday for freshman Democratic Rep. Ilhan Omar to apologize after insinuating that pro-Israel groups are pushing "allegiance to a foreign country."

Chairman Rep. Eliot Engel's demand comes after a bookstore event Wednesday where Omar argued that critics labeling her as an anti-Semite looked to silence a necessary conversation.

"I want to talk about the political influence in this country that says it is OK for people to push for allegiance to a foreign country," Omar said, according to The New York Times.

In a fiery statement Friday night, Engel, a New York Democrat, took Omar to task for yet another controversial comment over the political influence of pro-Israel groups on politicians.

"I welcome debate in Congress based on the merits of policy, but it's unacceptable and deeply offensive to call into question the loyalty of fellow American citizens because of their political views, including support for the US-Israel relationship," Engel said in the statement. "We all take the same oath. Worse, Representative Omar's comments leveled that charge by invoking a vile anti-Semitic slur."

"Her comments were outrageous and deeply hurtful, and I ask that she retract them, apologize, and commit to making her case on policy issues without resorting to attacks that have no place in the Foreign Affairs Committee or the House of Representatives," he added.

Omar's office did not immediately respond to a request for comment on Engel's statement.

The Democrat from Minnesota earlier this month faced criticism from both sides of the aisle and subsequently apologized for tweets insinuating that the pro-Israel lobbying group American Israel Public Affairs Committee, or AIPAC, was effectively buying off American politicians.

Omar had responded to a tweet by journalist Glenn Greenwald that reads, "GOP Leader Kevin McCarthy threatens punishment for @IlhanMN and @RashidaTlaib over their criticisms of Israel. It's stunning how much time US political leaders spend defending a foreign nation even if it means attacking free speech rights of Americans."

Omar replied, "It's all about the Benjamins baby," followed by a musical notes emoji.

Batya Ungar-Sargon, the opinion editor of the Forward, replied, tweeting, "Would love to know who @IlhanMN thinks is paying American politicians to be pro-Israel, though I think I can guess. Bad form, Congresswoman. That's the second anti-Semitic trope you've tweeted."

She later apologized after Speaker Nancy Pelosi, Majority Leader Steny Hoyer and other members of House Democratic leadership said anti-Semitism had to be called out "without exception."

"Anti-Semitism is real and I am grateful for Jewish allies and colleagues who are educating me on the painful history of anti-Semitic tropes," Omar said in a tweet. "My intention is never to offend my constituents or Jewish Americans as a whole. We have to always be willing to step back and think through criticism, just as I expect people to hear me when others attack me for my identity. This is why I unequivocally apologize."