Gap and Old Navy are splitting up 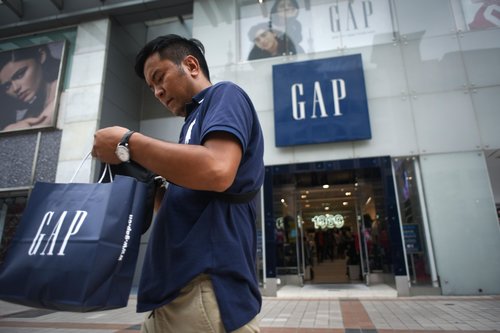 Gap and Old Navy have been trending in opposite directions for years. So they're finally splitting up.Gap said Thursday that it would break into two c...

Gap and Old Navy have been trending in opposite directions for years. So they're finally splitting up.

Gap said Thursday that it would break into two companies. One of the companies will contain Old Navy, while the other yet-to-be-named business, currently called NewCo, will comprise Gap, Banana Republic and other brands, including Athleta and Hill City.

The move is designed to allow Old Navy — which has grown to $8 billion in annual sales since it opened its first store in 1994 — to expand on its own. Meanwhile, the company can consolidate its older brands like Gap and Banana with its newer ones like Athleta and Hill City. NewCo will have about $9 billion in annual sales.

'We think the best way for each company to grow and meet the evolving needs of our customers is to allow them to pursue tailored strategies separately,' Gap CEO Art Peck told analysts Thursday. Peck will lead NewCo. Sonia Syngal, CEO of Old Navy, will keep running that company.

Wall Street cheered the decision: Gap stock was up 25% in after-hours trading.

The separation is a tale of two vastly different businesses: Old Navy has thrived in recent years, and sales at stores open at least a year grew 3% in 2018.

Meanwhile, the Gap has struggled — its sales fell 5% last year. Banana Republic has been closing stores, which has helped the company improve sales.

The Gap, which was founded in 1969, used to be the coolest brand in retail: It rode the mall boom in the back half of the 20th century, and its logoed sweatshirts and turtlenecks won over everyone from teens to moms and celebrities like Sharon Stone.

But the brand fell out of touch with the Baby Boomers who grew up on the brand, and it failed to attract the Millennials who drive fashion trends today. Retailers such as Levi's, Target and fast-fashion sellers H&M and Zara lured away Gap's denim shoppers with cheaper prices and trendier styles.

The company has been talking for a while about how to make the Gap a healthy part of the business again. In November, Peck described Gap's store count as unprofitable. As of the end of last quarter, there were 1,242 Gap stores worldwide. 758 of them were in North America.

On Thursday, the company said it will close 230 Gap stores over the next two years as part of its plan to 'revitalize' the Gap brand. The closures will affect 'specialty' Gap stores, which includes mall-based stores.

Most of those stores will be in North America, Peck told analysts Thursday. Chief financial officer Teri Stoll added that the company focused on stores that were not delivering, were in the 'wrong locations' or were not a 'strategic fit.'

About 130 of those closures will happen this year, according to Gap. The company also plans to open Old Navy and Athleta locations. Athleta, which will be part of the new Gap company, is a women's athleisure chain that has been a success. Hill City launched last year as Gap's men's athleisure brand.

Gap thinks it will save between $250 million and $300 million before taxes over the next two years because of its closure plans, according to a securities filing. It expects to finish splitting the companies in 2020.

But some analysts questioned why promising brands such as Athleta and Hill City were included in NewCo with the struggling Gap brand.

'This could have been an opportunity for a fresh start for Gap,' said Bob Phibbs, CEO of consultancy Retail Doctor. 'It's simply putting the NewCo brands though the ringer for another cycle of rinse and repeat.'