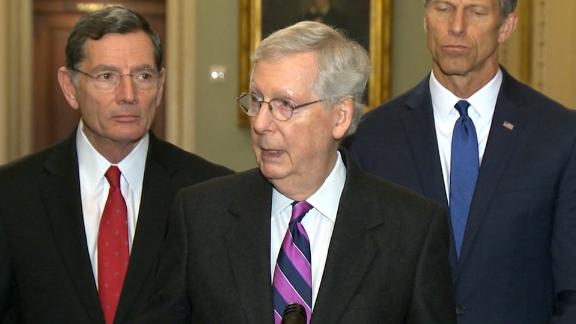 The House on Tuesday rebuked President Donald Trump over one of his signature issues, passing a resolution to overturn his emergency declaration to unlock money for wall construction at the US southern border.

The vote was 245-182. Thirteen Republicans voted with Democrats to pass the measure.

The resolution will next be taken up by the Senate, where it will put Republican unity to the test, though Senate leaders have signaled they will not bring it to a vote immediately.

It is not yet clear how many Republicans will vote for the resolution in the Senate, but it looks likely to pass the upper chamber, despite the fact that Republicans hold a majority. That would be yet another blow to the President, who has said he will veto the resolution if it comes to his desk.

A test of Republican unity in the Senate

If four Republicans join all the Democrats in the Senate to pass the resolution, the measure would then face a presidential veto. The White House formally issued a veto threat on Tuesday afternoon.

Congress would then need an overwhelming majority -- two-thirds of its members -- in both chambers to overrule the President. It is unlikely that there would be enough support on Capitol Hill to overturn a veto.

So far, there are three Republicans who have signaled they will vote in favor of the resolution. And Senate GOP aides fully expect the resolution to pass when it is brought to the floor.

GOP Sen. Thom Tillis of North Carolina, who is up for re-election in 2020, said in a Washington Post op-ed on Monday evening that he would vote in favor.

"As a conservative, I cannot endorse a precedent that I know future left-wing presidents will exploit to advance radical policies that will erode economic and individual freedoms," he wrote.

Republican Sen. Susan Collins, a key swing vote also up for re-election in 2020, has said that she plans to vote in favor if it is "a clean disapproval resolution."

GOP Sen. Lisa Murkowski of Alaska, another key swing vote, told reporters on Tuesday that she will vote in support of the resolution.

During the recent 35-day government shutdown, the longest such federal shutdown in US history, Trump pushed Congress to appropriate $5.7 billion for physical barriers along the border with Mexico. The divided legislature rejected his proposal and the President eventually accepted its bill for $1.375 billion in border security measures.

But before signing the bill, Trump announced he would go around Congress to get the wall he wanted, presenting Republicans on Capitol Hill with a difficult choice. While some will support their party's leader on his top campaign issue, others argue it could set a poor precedent for future Democratic presidents to push liberal policies without congressional input.

Republican leadership is not worried or up-in-arms right now about the state of play on the resolution, however, because they don't view this as a fight to block the resolution. They view it as a fight to make sure it stays below a veto-proof threshold and they appear on track for that now.

House Minority Leader Kevin McCarthy has expressed confidence that the GOP would deny votes in the House for a veto-proof majority.

"Yes," the California Republican said when CNN asked if they'd have the votes to deny a veto-proof majority. "If you read what the Democrats ... say, (that) the emergency is over -- no, it's not."

When the Senate will vote

Senate Majority Leader Mitch McConnell told reporters on Tuesday that he expects the Senate will vote on the resolution before the next Senate recess, which will take place the week of March 18.

"We will certainly be voting on it," he said.

McConnell said that GOP senators had a "fulsome discussion" at their afternoon policy lunch about the "legality and appropriateness" of the emergency declaration. The lunch was attended by Vice President Mike Pence and a lawyer from the Justice Department.

The Republican leader said he hasn't "reached a total conclusion" about whether he believes the President's emergency declaration is legal.

Trump calls on Republicans not to side with Democrats

The President has been putting public pressure on Republicans over border security and has urged them not to side with Democrats.

"I hope our great Republican Senators don't get led down the path of weak and ineffective Border Security," the President tweeted on Monday. "Without strong Borders, we don't have a Country - and the voters are on board with us. Be strong and smart, don't fall into the Democrats 'trap' of Open Borders and Crime!"

As of Tuesday morning, many Republican senators said they were still undecided about how they will vote on the resolution.

Sen. Martha McSally, a Republican from the border state of Arizona, and Sen. Pat Toomey, a conservative from Pennsylvania, told CNN they were still looking at their options.

Republican Sens. Tim Scott of South Carolina and David Perdue of Georgia said they planned to vote with the President against a resolution of disapproval.

Republican Sen. Lamar Alexander, of Tennessee, told CNN on Monday he does not support the President's emergency declaration, but would review the resolution of disapproval before deciding how he'd vote.

"I think it is unnecessary, unwise and inconsistent with the Constitution," said Alexander of the declaration. "And I feel strongly about that."

This story has been updated with additional developments Tuesday.