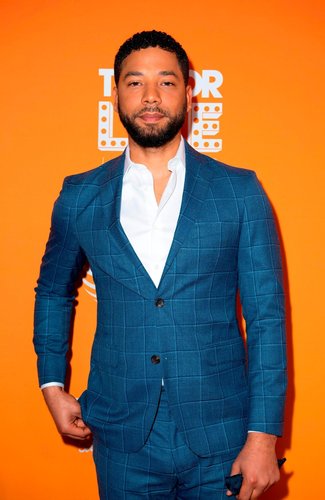 When Jussie Smollett released his debut album "Sum of My Music" last year, he was riding high.The actor and musician had also just finished directing...

When Jussie Smollett released his debut album "Sum of My Music" last year, he was riding high.

The actor and musician had also just finished directing an episode of his hit series "Empire" and appeared in the EPIX docu-series, "America Divided."

"I'm not gonna lie and pretend otherwise, I want this s**t to do well," Smollett told Fader last March of his first full album. "If I didn't, I would just play it for my mother because she f***ing loves it or I would just try and pitch the songs for 'Empire.' But no...these songs really mean something to me and I want people to hear me."

People are listening to Smollett now as questions mount over his report to police last month that he was the victim of a racist and homophobic attack.

In a statement from his attorneys issued Saturday, Smollett denied playing a role in the attack.

"As a victim of a hate crime who has cooperated with the police investigation, Jussie Smollett is angered and devastated by recent reports that the perpetrators are individuals he is familiar with," the statement read. "He has now been further victimized by claims attributed to these alleged perpetrators that Jussie played a role in his own attack. Nothing is further from the truth and anyone claiming otherwise is lying."

The "Empire" star told authorities two men who were "yelling out racial and homophobic slurs" assaulted him on January 29. He said one attacker put a rope around his neck and poured an unknown chemical substance on him.

Jussie Smollett case: Everything we know so far

It's unclear what will happen with Smollett's "Empire" character if it is proven that he was involved in planning the attack.

Other television shows have dealt severely with stars caught in controversy.

ABC pulled the plug on the reboot of "Roseanne" last year after Roseanne Barr went on a racist rant on Twitter.

The show was later brought back without Barr as "The Conners."

That's not to say Fox would cancel "Empire" given that it's an ensemble series and not built around Smollett's character.

Smollett's position as a black man who identifies as gay garnered attention to the reported attack, Drazdovich said, but that focus cuts both ways if it's discovered that Smollett lied.

"If his story does turn out to be false, the same people who gave him his platform could end his career," Drazdovich said.

Stardom came to the 36-year-old Smollett later in life, but he has been in the industry since he was a child.

One of six children of an African-American mother and white father, he was born in Santa Rosa, California.

According to an interview he gave Good Day New York in 2015, his family moved when Smollett was two years old to his father's native Queens, New York.

Smollett said he initially got into child modeling before trying his hand at movie work.

"It's funny because Spike Lee is here and the first thing I ever did, the first two films we ever did was extra work on [Lee's film] 'Mo' Betta Blues' and 'New Jack City' by Mario Van Peebles," Smollett said. "We moved to LA when I was like seven."

A young Smollett appeared in the movie "The Mighty Ducks" before snagging a role in the TV mini-series "Queen," which starred Halle Berry and aired in 1993.

He and his siblings later starred in a short-lived ABC sitcom about a group of orphaned brothers and sisters called "On Our Own."

Smollett's star began to rise more quickly when he landed the role of the middle son of the music industry powerhouse Lyon family on "Empire."

Smollett's character, Jamal, was inspired in part by the show's creator, Lee Daniels, who is also a gay man.

A scene from the first season in which Lyon patriarch, Lucious, played by Terrence Howard, throws a young Jamal into a trash can for dressing up in heels was based on Daniels' own experience.

Daniels was one of the first people to offer support for Smollett after he reported the attack.

"You didn't deserve -- nor anybody deserves -- to have a noose put around your neck, to have bleach thrown on you," Daniels said in an emotional video he posted on Instagram. "To be called 'die f****t,' 'n****r' or whatever they said to you. You are better than that."

"The entire studio, network and production stands united in the face of any despicable act of violence and hate -- and especially against one of our own," the company said in a statement immediately after the reported attack.

"Empire" showrunner Brett Mahoney told CNN earlier this month that the show had made no adjustments to their storylines in wake of the reported attack.

"I wouldn't stoop to those cowards...in terms of allowing what they did to effect how I'm telling my story," Mahoney said.

Smollett was back on set and in production on "Empire," Mahoney said at the time.

The series returns with new episodes on March 13.

Smollett is shown in scenes for an upcoming preview, as is his character's father Lucious Lyon standing over a white coffin.

20th Century Fox Television and Fox Entertainment released a statement regarding Smollett's role on the show after there was speculation that he may have staged the attack to keep from being written off the series.

"The idea that Jussie Smollett has been, or would be, written off of 'Empire' is patently ridiculous," the statement read. "He remains a core player on this very successful series and we continue to stand behind him."

CNN has reached out to Daniels and the studio for additional comment.