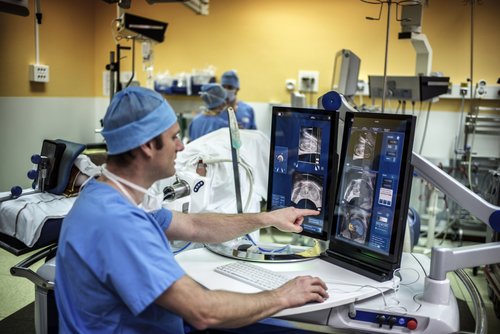 More men with low-risk prostate cancer are forgoing treatment to instead watch and wait to see whether their cancer progresses -- and experts say that's a go...

More men with low-risk prostate cancer are forgoing treatment to instead watch and wait to see whether their cancer progresses -- and experts say that's a good thing.

Among men with low-risk prostate cancer in the United States, 42.1% used the watch-and-wait approach, also called "active surveillance," in 2015, up from 14.5% in 2010, according to a study published in the medical journal JAMA on Monday.

Compared with high-risk or intermediate-risk, low-risk prostate cancer tends to grow very slowly or not at all, which is why "active surveillance" can be considered as an alternative to treatment options such as surgery or radiation therapy. Surgery and radiotherapy can come with some side effects, including a higher risk of erection problems or accidental urine or stool leakage.

In 2010, the US National Comprehensive Cancer Network updated its prostate cancer guidelines to recommend active surveillance for patients with low-risk cancers or a short life expectancy.

As the use of active surveillance climbed between 2010 and 2015, it became the most common approach for managing low-risk prostate cancer, according to the study.

"We found that in low-risk prostate cancer, active surveillance use nearly tripled," said Dr. Brandon Mahal, a clinical fellow in radiation oncology at Harvard University's Dana-Farber Cancer Institute in Boston and first author of the study.

"Overall, these numbers are a good sign and a good thing," he said. "From 2010 to 2015, there's been a lot of new evidence -- the highest level of evidence we can get in medicine, which are prospective trials and some of them randomized trials -- that have shown that active surveillance, conservative approaches or non-treatment approaches of low-risk prostate cancer have very favorable outcomes."

'This study is really the benchmark'

In the United States, about 11.2% of men will be diagnosed with prostate cancer at some point during their lifetime, according to the National Cancer Institute.

The new study included data on 164,760 men diagnosed with prostate cancer in the United States between 2010 and 2015. The data, which came from the Surveillance, Epidemiology, and End Results database, included information on each man's treatment approach.

Among men with high-risk disease, active surveillance remained nearly unchanged, going from 1.9% to 2.2%; prostatectomy increased from 38% to 42.8%; and radiotherapy decreased from 60.1% to 55%, the researchers found.

The study had some limitations, including that it analyzed trends only within a five-year period. More research is needed to determine trends over a longer time period and how those trends may impact public health. The study also lacked data on whether patients actually complied with their doctors' orders on active surveillance or other management approaches.

Yet overall, "this study is really the benchmark for what the rates of surveillance are in the United States," Mahal said.

"There have been other studies that have examined the same question and have found increasing rates, but those studies were either done with smaller databases or databases that didn't collect this type of information," he said. "Also, it's important to continue to follow these trends to know for sure what the management rates are in the US, and also to know in the population, how patients do on active surveillance."

'A major change in medical practice'

A study published in JAMA last year found that the use of a conservative approach for managing cancer -- including active surveillance -- went up from 27% in 2005 to 72% in 2015 among men with low-risk prostate cancer in the Veterans Affairs integrated health care system who were younger than 65 and from 35% in 2005 to 79% in 2015 among those 65 and older.

"It's very encouraging that the proportion of men who are receiving conservative management for low-risk prostate cancer has increased so much over time. ... However, it appears there's still a long way to go," said Dr. Stacy Loeb, urologist and assistant professor of urology and population health at NYU Langone Health in New York.

"For anyone in the low-risk prostate cancer category, what we now know is that the prognosis is quite good even without any treatment," said Loeb, who was not involved in the new research but was first author of last year's study.

When it comes to radiation or prostatectomy, "these treatment options do have potential side effects, such as impact on erectile function, urination and, in some cases, bowel function," she said. "So it is an attractive option for men to monitor the cancer and then receive delayed treatment on an as-needed basis if there's any appearance over time that the cancer is becoming more aggressive."

The new study reflects how the medical community continues to grow in its understanding of how best to treat certain types of cancer, said Dr. J. Leonard Lichtenfeld, interim chief medical officer at the American Cancer Society, who was not involved in the research.

"That doesn't mean they may never need radiation or surgery. The whole point of watching these men is to find if their prostate cancer changes its behavior over time. If it becomes more aggressive, then give treatment to those who really need it," he said. "That's a major change in medical practice."