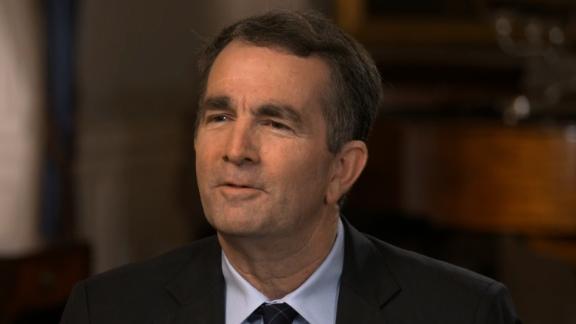 Embattled Virginia Gov. Ralph Northam said that since becoming engulfed in controversy surrounding his use of blackface decades ago, he has learned that he "was born in white privilege" and "why the use of blackface is so offensive."

In an interview that aired Monday on "CBS This Morning," Northam also referred to enslaved Africans as "indentured servants from Africa" before acknowledging that such a practice was slavery.

In Northam's first TV interview since the controversy erupted 10 days ago, CBS' Gayle King asks him what he has learned since dealing with the fallout from the revelation that his 1984 medical school yearbook page contained a racist photo and his own admission that he once dressed in blackface on a separate occasion.

"Well, several things, starting with I was born in white privilege and that has implications to it and it is much different the way a white person such as myself is treated in this country ..." he said in the interview.

"Did you not know that you were born into white privilege?" King asks, cutting off the governor.

"I knew I was, Ms. King, but I didn't realize, really, the powerful implications of that. And again, talking to a lot of friends, that has come crystally clear to me this week. I've also learned why the use of blackface is so offensive," he replied. "And yes, I knew it in the past, but reality has really set in."

When asked by King whether or not he knew blackface was offensive in the past, Northam said that he thinks "we're all on a learning curve."

"This is a week that has been very eye-opening to me," Northam added.

The photo on Northam's page of the medical school yearbook shows two people -- one wearing blackface and the other in a KKK robe and hood. After initially saying he was in the photo, he later reversed his position but did say he once appeared in blackface at a dance competition in San Antonio in the early 1980's.

In clips of the interview that aired on Sunday, Northam told King that he has no plans to resign, despite calls for his resignation from both within and outside of Virginia.

"Virginia also needs someone who is strong, who has empathy who has courage and who has a moral compass, and that's why I'm not going anywhere. I have learned from this. I have a lot more to learn but we're in a unique opportunity now," he said.

In another part of the interview, Northam refers to enslaved Africans as "indentured servants from Africa," a characterization that King responds to by saying "also known as slavery."

In a statement provided to CNN Monday, Northam responded to criticism of his use of the term "indentured servants" saying, "During a recent event at Fort Monroe I spoke about the arrival of the first Africans in Virginia and referred to them in my remarks as enslaved. A historian advised me that the use of indentured was more historically accurate -- the fact is, I'm still learning and committed to getting it right."

Allen and Paulding county residents being impacted by Industrial-Enhanced snow