'Hitler watercolors' fail to sell at auction amid forgery concerns 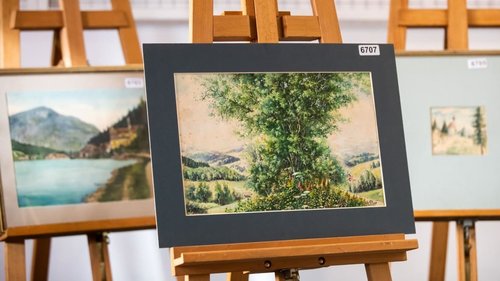 Five paintings, purportedly by Adolf Hitler, failed to sell on Saturday at a controversial auction in the German city of Nuremberg -- the location of several...

Five paintings, purportedly by Adolf Hitler, failed to sell on Saturday at a controversial auction in the German city of Nuremberg -- the location of several major Nazi rallies during the 1930s.

The watercolors, and a wicker chair emblazoned with a swastika symbol that was also believed to have been owned by the dictator, were among the items on sale at an auction criticized by several of the city's politicians and citizens.

But none of the works met their lofty starting prices, AFP reported, after suspicions about their authenticity were raised.

Among the paintings was a watercolor depicting a mountain lake, which had a starting price of $51,000. The collection comes from "Austrian or European private ownership," from the estates of collectors, and from heirs, according to the auction house.

It remains illegal in Germany to hold public displays of Nazi symbols, except in certain educational or historical contexts. The auction house was consequently obliged to blur out Nazi insignia and symbols in their brochure to comply with German law.

And the sale sparked anger among politicians and the public, with Ulrich Maly, the mayor of Nuremberg, accusing it of being "in bad taste" in the Sueddeutsche Zeitung newspaper.

The auction house was also forced to remove 26 artworks from its brochure over authenticity concerns. "Unfortunately, we must inform you that some of the pictures have been dropped because of a review," the auction house said in a statement sent to German newspaper Spiegel.

This came shortly after prosecutors confiscated 63 artworks bearing "A.Hitler" or "A.H." signatures from the Weidler premises on Wednesday.

Antje Gabriels-Gorsolke, spokeswoman for the Nuremberg-Fuerth prosecution department, told Agence France-Presse that they had opened an investigation into certain individuals "on suspicion falsifying documents and attempted fraud."

"If they turn out to be fakes, we will then try to determine who knew what in the chain of ownership," she said.

Stephen Klingen and Christian Fuhrmeister from the Central Institute for Art History in Munich, south Germany, told CNN that people are "rightly concerned" with the auction. "We are negotiating the past, in this case German past and Nazi memory, which is embodied in Adolf Hitler," they said.

"Something that has been taboo in the past, now pops up -- there are collectors who love to buy these objects."

Klingen and Fuhrmeister said, however, that auctions such as this should go ahead despite widespread criticism. "It is a necessary discussion -- to reevaluate the way Germany looks back at its Nazi past in the 21st century," they said.

"It is an ethical and moral question -- I believe any modern democracy should be able to cope with this."

They added that they would rather see open discussion surrounding the history of Hitler and the Nazis, rather than it once again becoming taboo.

The Weidler auction house had described the event as a "special sale" in its brochure, and said the collection of works includes "rare pictures and furnishings." The auction house did not respond to a CNN request for comment.

Hitler was an aspiring "would-be" artist in his early years, but was rejected twice from the Academy of Fine Arts Vienna. He earned money by selling watercolors and "post-card style" pictures for newlywed couples before enlisting in the German army prior to the First World War.

Klingen described Hitler's artistic skills as "a moderately ambitious amateur," but noted that his artworks were comparable to "hundreds of thousands" of others from the period.

The Weidler auction house has sold a number of alleged pictures by Hitler in recent years, the most expensive of which fetched $147,000 in 2014.