Suburban McMansions are out. Ritzy, remote ranches are in 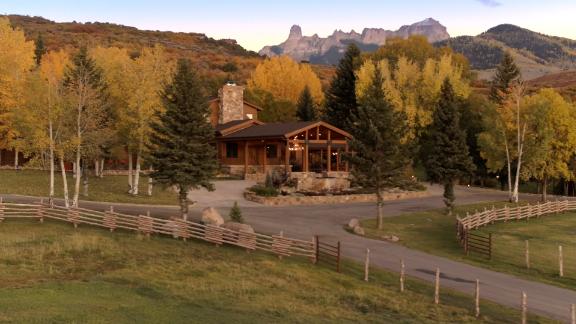 Go inside some of the multi-million dollar ranches currently on the market.

Luxury real estate prices are dropping in many parts of the country. But the market is heating up for high-end quiet retreats that bring buyers closer to nature.

Last year saw more ranches coming onto the market, with a 7% increase in the number of properties over 2017, according to Realtor.com. And prices are rising. Median asking prices for ranches of more than 1,000 acres reached $3.1 million in 2018, up 11% from 2017 — outpacing the rest of the market, which grew by 8%.

Some of these large properties are working ranches with livestock, but more than half of the listings last year mentioned the property's main purpose was for recreation.

Buyers are turning away from coastal markets and looking for a residential property that will hold value, says Bill McDavid, director and real estate partner at Hall and Hall, which sells high-end ranches. Last year was the company's second best year in its 73-year history.

Another agent, Ken Mirr, founder of Mirr Ranch Group, says 2018 was one of his firm's best years ever, as well. "And we're starting 2019 with $100 million under contract."

Several high-profile ranches owned by big names in business have also recently come on to the market, meaning 2019 could shape up to be another big year.

Even when spending tens of millions of dollars, buyers are surprised at the value they get for a sprawling, private enclave.

"You get a person out of Silicon Valley or New York into the truck and show them something that looks to them like the size of a national park and it costs the same as their single family home in Connecticut? They're interested," McDavid says.

They're looking to get away from it all, so privacy is top priority. But buyers have wish lists that are often unrealistic, he says.

"They want to get off the plane and be in their own private valley where they can't hear anything but the birds. They want elk running across the lawn," he says. "They want it 15 minutes or so to an airport and preferably within 30 minutes of a quaint little town that has a place with lattes and good restaurants and cultural events. Even at $30 million that is often a fantasy."

And if you're a typical ranch buyer, you're buying in all cash, says Mirr.

He adds that prospective buyers need to study up on the complexities of owning a ranch: water rights, grazing permits, conservation and tax implications, hunting regulations, mineral rights and whether they need to commission an environmental analysis.

Many of the ranches at the top end of the market are legacy properties, some offered for the first time after being held by a single family for decades.

Private equity power player, Henry Kravis, bought his 4,603-acre ranch, Westlands, from a seller headed into bankruptcy in 1991 and has spent millions improving it.

The property now has a 19,000-square-foot lodge with a swimming pool, two large guest cabins, a carriage house as well as a tennis court and a four-hole golf course designed by Greg Norman, who lives down the road. The ranch also boasts over five miles of water on both forks of the White River, a helipad and a helicopter hangar. It's being offered at $46 million.

Another, private equity executive, Charlie Gallagher, is offering his 6,343-acre Elk Island Ranch in Colorado, which is a sporting ranch with its own ski slope for $36 million.

But the property-without-peer on the market right now is financier T. Boone Pickens' Mesa Vista Ranch in the eastern Texas panhandle.

It's a 100-square-mile property with 25 miles of frontage along the Canadian River that includes a 25,000-square-foot lodge, an 11,500-square-foot lake house, a 6,000-square-foot family house, a gatekeepers' house, a chapel, a 50-dog kennel, a runway and an airplane hangar. All of the improvements have been designed and overseen by Pickens during his ownership that began with a single parcel he bought in 1971. The property is listed for $250 million.

According to Pickens, selling the ranch is the prudent thing for a now 90-year-old man to do. He says he feels it's time to get his affairs in order, since much of the sale of the property will flow into his personal foundation, the T. Boone Pickens Foundation.

"There are many reasons why the time is right to sell the ranch now," he said in a statement about the sale. "Not the least of them ensuring that what I truly believe is one of the most magnificent properties in the world winds up with an individual or entity that shares my conservation beliefs."

But you don't need hundreds of millions to own a beautiful ranch. Ranches on the lower end of the market can sell for anywhere from hundreds of thousands of dollars up to a few million. The typical sale for Hall and Hall is around $8 million, says McDavid.

A little elbow room for his daughters was what Dave Miner was looking for when he went ranch hunting. Miner, who owns Miner Family Winery in Napa Valley and jazz guitar company, Benedetto Guitars, says growing up in Chicago, his family would holiday in Wisconsin in search of a little tranquility. "Vacation was always getting away from human beings."

He cast a wide net for a low-population getaway where he could enjoy the outdoors: Colorado, Idaho, Oregon, Montana.

Ultimately, he bought a $2.5 million, 70-acre ranch in the Bitterroot Valley of Montana. It's a little small by ranch standards, but with a family home that has a built-in wine-cellar right on the Bitterroot River where his daughters could ride horses, it suited him. Since buying it in 2014 he has added a guest house and a party barn for entertaining friends, hosting wine business gatherings and holding music events.

"Everyone needs some balance," he says. "It is a great place to be with my family, relax, fish, hike and spend some time doing things other than working."