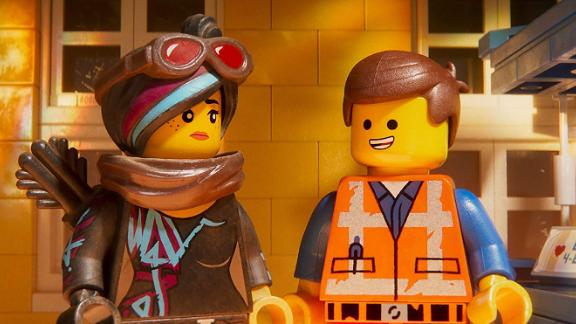 Chris Pratt and Elizabeth Banks return to lead the voice cast of the animated sequel 'The Lego Movie 2: The Second Part.' David Daniel takes a look.

"The Lego Movie 2: The Second Part" does its best to reconstruct the first one's charms, with only fitful success. Far from awesome, it settles for being just OK -- lacking the surprise that elevated the original, while appearing reasonably content to simply follow the instructions.

Once again, the movie features a mash-up of rat-a-tat, occasionally surreal jokes; movie references that will sail over the heads of younger kids (unless their parents have shown them "The Road Warrior," the original "Planet of the Apes," "Back to the Future" and "Twilight," among others); and a sweet underlying message, tethered to an eventual glimpse of live-action reality.

The clues, however, prove less subtle, while the movie labors in its quest to tease them out, after an energetic opening sequence that picks up where its predecessor left off.

That introduction -- providing the strongest section right off the bat -- is quickly followed by a time jump, rejoining Emmet (voiced by Chris Pratt), Lucy (Elizabeth Banks) and their colorful circle of mini-figure pals five years later, where their happy world has become a more dystopian (albeit colorfully animated) one.

Emmet's sunny disposition, however, largely ignores that drift, as he thinks of little else but ways to spend happily ever after with Lucy. All that comes to a crashing halt when a spaceship arrives, whisking Lucy and others away and forcing Emmett into rescue mode, trying to stave off his murky visions of an existential threat.

The premise allows for the introduction of some new characters, including Tiffany Haddish as Queen Watevra Wa'Nabi, ruler of the Systar System, who is planning a "matrimonial ceremony" that's ultimately central to the larger plot.

The principal innovation in the film -- directed by Mike Mitchell, from a script credited to producers (and former directors) Phil Lord and Christopher Miller -- stems from the more ambitious and generally clever musical numbers, including one playing off the "Everything is Awesome" song that promptly embedded itself in everyone's heads.

"The Second Part" doesn't entirely settle for the same-old, same-old model, weaving in a key theme that owes a debt to the "Toy Story" films, mainly in the idea of kids growing up and leaving "childish things" behind.

Still, the madcap nature of the exercise -- and narrative road map that the earlier movie provides -- can't help but make this incarnation feel less inspired, for all its colorful irreverence, before rallying a bit at the finish.

All good animated movies operate on multiple levels, providing the kind of visuals, action and humor that can beguile children while tapping into deeper ideas and concepts that resonate with those responsible for squiring them to the theater.

"The Lego Movie 2" tries to touch each of those bases, and with the comfort of the previous hit under its belt, the producers deserve some credit for not phoning it in; still, while all the pieces are there, it's just not as adept at putting them together.