Shutdown negotiations consist of 3 meetings, 4 letters and that's about it 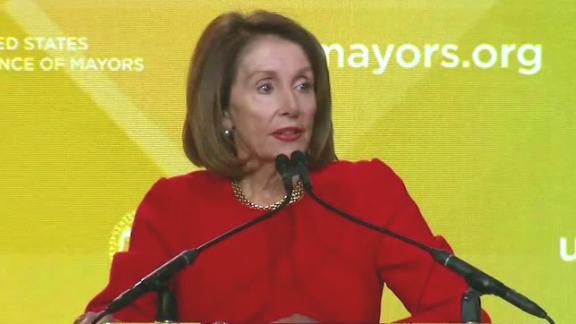 While addressing the Conference of Mayors, Speaker of the House Nancy Pelosi said she was concerned about President Donald Trump using government shutdowns in the future if he doesn't get his way.

The government has been shut down for more than a month and there's no end in sight.

President Donald Trump and House Speaker Nancy Pelosi can't even agree on how to be in the same room with each other, since she said he should not give the State of the Union address in the House chamber with the government shut down. He said he'll be giving it anyway, setting up a side showdown over that issue.

Surely, some sort of negotiations have been happening at the staff level, but the principals -- Trump, Pelosi, Senate Minority Leader Chuck Schumer and Senate Majority Leader Mitch McConnell -- will have to talk things out for the shutdown to end.

Judging by this timeline of their public talks and interactions, something will have to change. Because things aren't going very well.

Pelosi and Schumer visit the White House and get into a televised argument with Trump about the wall and the shutdown. Trump says he'd be proud to shut down the government.

Pelosi and Schumer, joined by their Republican counterparts -- House Minority Leader Kevin McCarthy and McConnell -- go again to the White House. This time the meeting is not televised, but it doesn't go any better. Shortly thereafter, Pelosi officially becomes speaker and begins moving bills to temporarily open the government.

They don't have the votes to pass the Senate, and McConnell won't give them time on the Senate floor.

January 8 - Both sides take their arguments to the people

Trump addresses the nation from the Oval Office, says there's a crisis at the border and that he can solve the problem in 45 minutes with a meeting the next day. Pelosi and Schumer address the nation from Capitol Hill and say they won't approve a wall.

January 9 - Trump walks out on Pelosi and Schumer

The leaders meet again at the White House and Trump quickly asks if Pelosi will ever let him build his wall. She says no. He walks out.

She doesn't tell him he can't come, exactly. But her letter's meaning is clear. The speech had been planned for January 29.

Publicizing her planned trip to a war zone, Trump sends Pelosi a letter denying her the use of a military aircraft and invites her to fly commercial.

January 23 - Trump informs Pelosi he expects to give State of the Union address, she counters

In a letter, Trump rejects Pelosi's letter saying he should delay the State of the Union address, which brings us to stalemate on two issues.

Pelosi responds to Trump's letter with a letter of her own, telling him she won't allow the State of the Union address in the House this year while there's a shutdown.

'I am writing to inform you that the House of Representatives will not consider a concurrent resolution authorizing the President's State of the Union address in the House Chamber until the government has opened,' Pelosi wrote.