Trump nominates William Barr to be his next attorney general 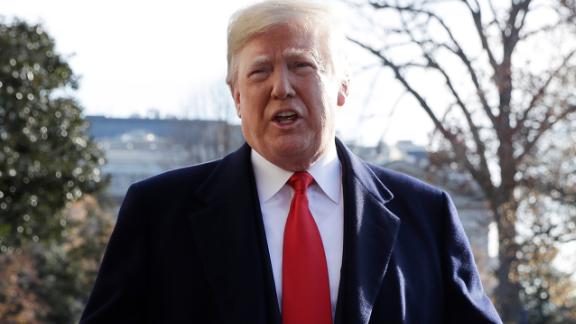 President Donald Trump has decided to nominate former Attorney General William Barr to be the next permanent head of the Justice Department, the President told reporters Friday.

"I want to confirm that Bill Barr, one of the most respected jurists in the country, highly respected lawyer, former attorney general under the Bush administration, a terrific man, a terrific person, a brilliant man," Trump said as he departed the White House. "I did not know him until recently when I went through the process of looking at people and he was my first choice from day one, respected by Republicans and respected by Democrats."

"He will be nominated for the United States attorney general and hopefully that process will go very quickly," Trump added.

Barr previously worked at the CIA in the 1970s and served in several leadership roles at the Justice Department serving under President George H.W. Bush. He ultimately served as attorney general from 1991 through 1993. He subsequently served in several executive and leadership positions at corporations, including Verizon Communications. Barr also served as a board member on CNN's parent company, Time Warner, Inc., (now Warner Media) from 2009 until 2018.

Prior to Trump's comments, Barr had emerged this week as a consensus candidate to succeed Jeff Sessions as attorney general, two sources familiar with Trump's thinking told CNN on Thursday.

The announcement comes during a critical time for special counsel Robert Mueller's investigation, of which the next Justice Department chief will inherit oversight. Barr has previously offered mixed opinions about the investigation, having praised Mueller but also publicly criticizing political donations made by several members of his team.

Barr also served as Mueller's boss when he was attorney general in the early 1990s and Mueller led the criminal division at the Justice Department.

The move was an abrupt end to what had been a tumultuous tenure for Sessions, originally one of Trump's earliest and most loyal surrogates as an Alabama Republican senator.

Sessions was an enforcer of much of the Trump administration's hardline approach on immigration and regularly praised the President's tough words on crime. But even as he continued to carry out the Trump agenda, his relationship with the President remained strained and fraught for months due to the ongoing Mueller investigation, because Sessions recused himself from all matters related to the 2016 campaign early in Trump's term.

Fans in the Justice Department

Officials at the DOJ are thrilled with Trump's selection of Barr, multiple current and former officials told CNN. He's universally seen as solid, reliable conservative, but also someone who can get confirmed.

Deputy Attorney General Rod Rosenstein was "elated" by Trump's selection of Barr, according to a source close to him.

One Justice Department lawyer who had been nervous about who the President might pick praised the choice of Barr, saying it is good for morale.

"As compared to other potential picks, this is a great choice," said the official. The source called Barr a "very mature choice," and said when Barr emerged as the front runner people at Justice were hoping he'd be the pick "because he's tough he's principled and he's independent."

Chuck Cooper, Sessions' lawyer, also praised the pick, saying Barr served "honorably and well, earning the respect of people on both sides of the aisle. He is a fine man and a great choice to head the department."

As for how quickly Barr could be confirmed, one congressional source notes it's usually at least two months from nomination to confirmation and said if the appropriate paperwork gets to the Hill in time, a hearing could be held in January.

South Carolina Republican Sen. Lindsey Graham, a leading contender to become the next chairman of the Senate Judiciary Committee, praised the President's selection of Barr, saying he "will provide new and much-needed leadership for the Department of Justice."

"Having previously served as Attorney General under President George H.W. Bush, Mr. Barr is a known quantity, a man of the highest integrity and character, and has an impeccable reputation. He will provide a strong and steady hand to the fine men and women at the Department of Justice," Graham said in a statement, adding, "I will do everything in my power to push him through the Senate Judiciary Committee and onto the floor of the Senate for eventual confirmation as soon as possible."

The American Civil Liberties Union voiced concern about Trump's pick to lead the Justice Department, saying Barr "must commit to defending the rule of law and civil rights, not serving as a political arm of Trump's anti-constitutional agenda."

"William Barr's record suggests that he will follow Jeff Sessions' legacy of hostility to civil rights and civil liberties," Faiz Shakir, the ACLU's national political director, said. "If confirmed, Trump will have a partner in one of the most powerful roles of the administration, and someone who defended the president's decision to fire James Comey."