Ivanka Trump says 'no equivalency' between her email use and Clinton's 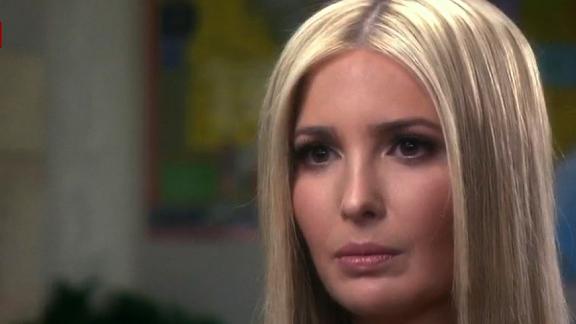 Ivanka Trump, daughter and senior adviser to the President, defended her use of a private email account in an interview with ABC News.

Ivanka Trump defended her use of a personal email account for official government business, telling ABC News in an interview airing Wednesday that there is "no equivalency" to Hillary Clinton's use of a private email server.

"There really is no equivalency," Trump told ABC's Deborah Roberts in an interview on "Good Morning America," adding that her emails were focused on "mainly scheduling and logistics and managing the fact that I have a home life and a work life."

She was emphatic that "everything has been preserved" and stored in the White House system.

Trump said there was "no equivalency" to then-Secretary of State Hillary Clinton's use of a private email server, which became a central rallying cry for her father's campaign.

Ivanka Trump noted that there were "mass deletions" of Clinton's emails "after a subpoena was issued," though an FBI investigation did not find any evidence of obstruction of justice on the part of Clinton and her aides in the matter.

"My emails have not been deleted, nor was there anything of substance, nothing confidential that was within them. So, there's no connection between the two things," she said.

"All of my emails are stored and preserved. So there really, there's just, there were no deletions, there was no attempt to hide, there's no equivalency to what my father's spoken about," she said.

Asked if the President's rally refrain of "lock her up" applies to her, Trump laughed.

'Devastating' images on the border

Trump, who has previously expressed disappointment with family separation at the border, called images of the children fleeing tear gas at the San Ysidro border crossing "devastating," but largely echoed her father's sentiments on the caravan.

"I think, like any other person with a heart, it's devastating to see the images and seeing children put at risk. Running towards the border is heartbreaking, there's no other way to process it. It also makes me angry and makes me angry that we haven't been able to come together as a nation and change our laws," she said.

Asked about her father's authorization of lethal force at the border, Trump initially said that was not on the table.

"I don't believe that that's what he said, but his primary role as commander in chief is to protect the nation's borders," she said, adding that lethal force "is not, I think, something that anyone's talking about."

But the President told reporters at Mar-a-Lago last week that he's "given the OK" to use lethal force on the border, adding that he "(hopes) they don't have to."

Pressed on this, his daughter clarified to ABC, "So lethal force, under any circumstance, would be the last resort. But he is the commander in chief of the armed forces of this country, so he always has to be able to protect the border ... he's not talking about innocent asylum seekers."

"Nobody wants to see anyone get hurt," she said, but, said her father is "not talking about innocent asylum seekers" when it comes to use of force.

Ivanka Trump expressed confidence during the interview that she and her family have "nothing to be concerned about" as special counsel Robert Mueller continues his probe of Russian interference in the 2016 election.

"I know the facts as they relate to me and my family, and so I have nothing to be concerned about," she said.

Her brother, Donald Trump Jr., and her husband, Jared Kushner, have been questioned by Mueller's investigators. Her father provided written responses to questions earlier this month.

But, like her father, Trump said it's time for the investigation to wrap up.

Relationship with her father

Trump also discussed navigating the relationship with her father as a senior staff member in his administration.

Asked if she advises him on his tone, Trump said, "He is my father, and he's my boss. And one of the reasons that I have such a good relationship with him in both a personal and professional capacity is because I'm incredibly candid with him."

She called her father an "incredible unifier" and denied that he is dividing the nation with his rhetoric.

"I reject that. I think that he is creating policy that's going to lift all Americans," she said.

Although Trump says she advises her father behind the scenes, she has rarely spoken out on controversial issues or parted with her father publicly, largely keeping her head down and focusing on her portfolio of women's economic empowerment and workforce development. On Tuesday, she traveled to Idaho to tour a school alongside Apple's Tim Cook.