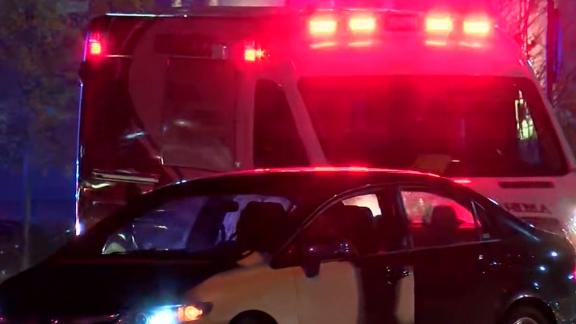 A Thanksgiving night shooting at a mall in Alabama left two people injured and a gunman dead, authorities said Thursday.

The incident at the Riverchase Galleria in Hoover started with a physical altercation between an 18-year-old and the 21-year-old gunman, police said. The confrontation occurred in the mall, near Footaction and JC Penney stores.

Police do not know how the confrontation began, but "we do not believe at this point the 18-year-old was armed," Hoover police Capt. Gregg Rector said.

The gunman opened fire, shooting the teen twice in the torso, according to police. An officer confronted the gunman as he ran away from the scene and fatally shot him, Rector said.

The officer involved has been placed on administrative leave while the Jefferson County Sheriff's Office investigates the incident, police said.

A 12-year-old girl was also struck and injured, but it's unclear by whom, Rector said. The two people injured have been hospitalized.

The girl had a single gunshot wound and has gone through surgery and "does not have life-threatening injuries," Rector told CNN.

Witnesses described hearing gunshots inside the mall, which was open late on Thanksgiving. The scene was chaotic, with customers screaming and staff working to lock down the shopping center, witnesses told CNN affiliate WBRC.

The Hoover Police Department said the scene is now secure.

Hoover is about 10 miles from Birmingham.

Brookfield Properties, which owns the shopping center, said it was devastated by the shooting.

"We are working closely with the Hoover Police Department and are grateful for their swift action to contain the situation," spokeswoman Lindsay Kahn said.

"While there is no current danger to our community, the shopping center will remain closed for tonight."