To be an Asian woman in America 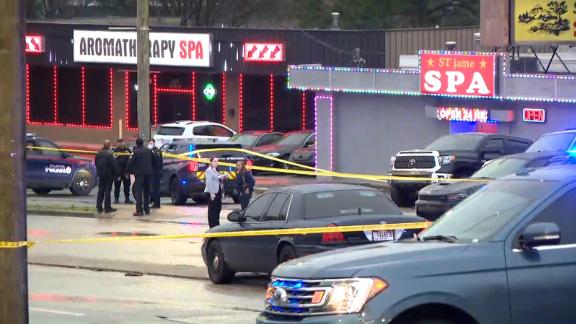 Authorities in metro Atlanta are investigating whether shootings at three massage parlors that left eight people dead and one wounded are connected. CNN's Ryan Young reports.

Last night, just like the rest of the world, I watched news reports of the Atlanta shootings. I saw images of Atlanta businesses, the photo of a young White man, and the sensational headlines. It's now been confirmed that eight people were shot dead, six of them Asian women.

I don't know the victims' names. The name of the shooter was quickly released Tuesday night and was on people's minds Wednesday more than his victims. We've learned from news reports that he told police he killed these women out of "revenge" -- that he was a sex addict who wanted the "temptation" of these massage spas to go away.

The police say the shooter told them that this mass killing was not racially motivated. But it's clear that the people he targeted were Asian women -- he allegedly went to places where he knew Asian women would be and shot them. And Asians across the United States, women and men, are understandably terrified.

Let me share what I know about what it means to be an Asian woman in the US, especially in the South, a place that, until very recently, I called home for nearly 20 years.

To be an Asian woman in America means you can't just be what you are: a fully enfranchised human being. It means you are a blank screen on which others project their stories, especially, too often, their sexualized fantasies -- because US culture has long presented Asian women as sexualized objects for White male enjoyment.

This happened when Chinese immigrant women first came to the US in the 19th century, kidnapped or bought for sale in China and shipped to America, or tricked into sexual servitude when the domestic worker jobs they were promised disappeared and the only job they could get was to have sex with men for money. They did not get to keep the money. That went to the men who bound them, sometimes in cages -- forcing them to have sex with men. Many of these women died of disease, malnourishment, and abuse without being released from their sexual servitude --that's the founding story of Asian women in America.

To be an Asian woman in America means hearing men, especially white men, try to tell you their war stories from Korea, Vietnam and sometimes the Middle East. I have been approached numerous times by white male veterans in the South asking me if I was either Korean or Vietnamese. When I tell them I'm Chinese American, they are disappointed but still tell me about their Asian war stories and how I remind them of these Korean or Vietnamese women they once knew. I always extricate myself from these conversations as soon as possible.

That strangers think it is OK to monopolize my time this way speaks volumes about how White men treat Asian women in US society -- as objects to be their sounding board as they work through war trauma and as living reminders of the Asian women they left behind, with the unspoken stories of sexual exploits lingering in the air.

To be an Asian woman in America, working in a place called Youngs Asian Massage -- as several of the shooting victims were -- means having men assume you are a sex worker, that you are not what you are: a human being worthy of dignity and respect like every other person.

To be an Asian woman working in a place like this during the pandemic means you have serious financial concerns -- you can't work safely from home; you have to earn tips in the service industry; you have to put up with abuse from customers because in America the customer is always right, especially when that customer is a man.

To be an Asian woman working in the US South in the massage industry means being an object, not a subject; being neither Black nor White and thus seen to have honorary white status, which in practice conveys a false belief that you aren't subject to White supremacy; being invisible except when you have been killed by a white man who claims it's not his fault -- it's his addiction. It means further disappearing: being one of six women killed in what people aren't even calling a racially motivated crime, although can there be any doubt that it was misogyny and toxic masculinity that killed you?

What can we do? What can YOU do? Do not look away. These are not one-off stories. There is a whole history of sexualized violence against Asian women in America.

Learn about the history of Asian Americans.

Take a Hollaback Bystander training so that all women, including Asian women, don't have to feel so afraid and vulnerable.

Treat Asian American women as what they are instead of the stereotypes and racialized sexual fantasies they've been portrayed as for far too long. We are fully enfranchised human beings -- just like you -- who demand and deserve respect and dignity as we live our lives.

A day in the life of a paramedic: Riding along with Three Rivers Ambulance Authority