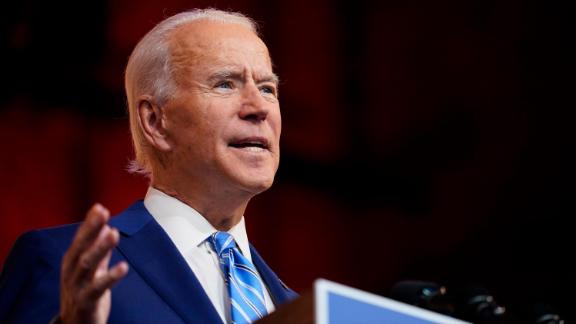 President-elect Joe Biden named key members of his economic team on Monday, with the long-expected announcement of Janet Yellen as treasury secretary along with three other women in top roles.

As President-elect Joe Biden unveils his choices for the top jobs in his administration, we hear a mixture of rejoicing and disappointment, praise and criticism from the world of politicians and pundits. It's not easy pleasing every faction, including in the ideologically fractured Democratic Party.

One Biden choice, however, stands out as sheer genius. His selection of Janet Yellen as nominee for Treasury Secretary, manages the nearly impossible feat of threading the needle between Democrats and Republicans, progressives and centrists, Wall Street and Main Street.

If anyone other than Donald Trump were president today, Yellen would likely still be chairing the Federal Reserve Board. She was in the job when he became president, but Trump, who likes to hire people who look like the Hollywood version of their role, broke with tradition and failed to reappoint her when her first term expired. This was at least in part, because (according to a Washington Post account) he thought she was too short.

She is 5 feet tall, and a towering economist.

The 74-year-old does not seek to draw the spotlight, but it will find her. Don't be surprised if her fashion trademark, a turned-up collar, catches on.

Biden's choices have garnered much attention for their unprecedented diversity. Observers have noted the depth of experience and qualifications of the candidates; others have pointed to the fascinating backgrounds of his fledgling team. But beyond bringing together women, men, Latinos, African Americans, Asian Americans and people of a wide range of ages, Biden is infusing the government with a level of expertise -- and experience -- that has a strong chance of bringing results.

There's a reason why when news that Yellen was going to Treasury got out the stock market rocketed to new heights and praise arrived from all quarters. It's not often that you hear admiration for the same person from rightist and left-leaning economists.

That is likely because Yellen is an economist's economist. (She is also the mother of an economist and the wife of one, George Akerlof, who won the Nobel Prize in Economics.) In addition to chairing the Federal Reserve towards the end of the Great Recession, she chaired Bill Clinton's Council of Economic Advisers. No economist has held the country's top three economics jobs. Assuming she is confirmed by the Senate, a safe bet, she will come to the office with that unmatched experience.

The Fed's function is to foster conditions for economic growth with low inflation. But Yellen has always stood out as an economist that focused on the impact of the economy on the lives of individuals. That, by the way, is a common denominator among many of Biden's choices for his economic team. Yellen is a labor economist, studying factors affecting unemployment and wages, with attention to issues like discrimination, income inequality and the shortcomings of the free markets.

Navigating between the Scylla and Charybdis of a divided country, of competing priorities, of government debt versus fiscal stimulus, is not new to Yellen.

At the Fed, she drove monetary policy, a process guided primarily by decisions over whether and when to lower or raise interest rates, movements that markets watched breathlessly. Raise too fast and the economy (and stock prices) can stall; lower too much and inflation can spike. She managed to keep both sides, hawks and doves, happy.

Those who questioned her choices, found someone open to discussing different points of view. But in the end, she tends to be the smartest, most prepared one in the room. In 2013, a Wall Street Journal analysis crowned her the Fed's top forecaster.

In the current crisis, the Fed has done just about all it can with interest rates. It's now time for fiscal actions, meaning government spending to boost the economy. That's where the debate will rage over the size of the national debt. But the Fed and the Treasury must work together; these days, under the Trump administration, they are at each other's throats. Yellen, with her time in both seats, will be perfectly positioned to harmonize that relationship.

When it comes to boosting debt during the pandemic, Yellen has already made clear that she stands firmly on the side of stimulus spending to pull the economy out of this quicksand. "While the pandemic is still seriously affecting the economy we need to continue extraordinary fiscal support, but even beyond that I think it will be necessary," Yellen told Bloomberg in October.

But she has never advocated disregarding the size of the deficits. In fact, she's on the board of the Committee for a Responsible Federal Budget, a distinguished non-partisan group that describes itself as "committed to fiscal responsibility." Incidentally, she is also the president of the American Economic Association.

With the economy in crisis, there's no better choice. Yellen will have a lot of leeway but, for all her expertise and self-effacement, she is sure to run into obstacles in Congress, where Republicans tend to become deficit hawks whenever there's a Democratic president. Political infighting is the one weak spot in her resume.

Even so, this is a stellar choice. Flip up your collars, it's Yellen to the rescue.

Here's what we know in the search for Brian Laundrie