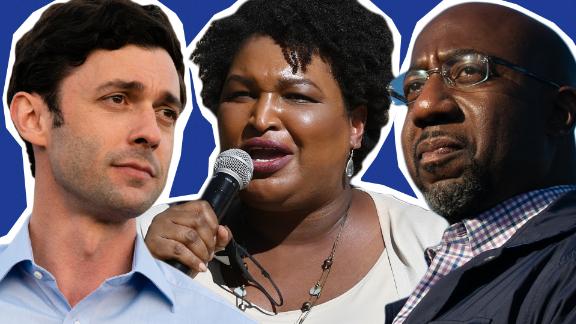 The battle for control of the Senate is still on, and it all comes down to Georgia. In his latest episode of The Point on YouTube, CNN's Chris Cillizza explains how on January 5, the Peach State will decide which party controls the world's greatest deliberative body for the next two years.

For most Americans, this holiday season is a welcome respite, an opportunity to put the long and fractious 2020 election season behind them. But that's not the case here in Georgia. Mixed in with preparations for a subdued pandemic Thanksgiving, Georgians are still being bombarded with dire campaign commercials warning of coal in our Christmas stockings if we cast the wrong votes.

Why is that? Because we have two contested US Senate runoffs on January 5. The Republican incumbents, first-term Sen. David Perdue and recently-appointed Sen. Kelly Loeffler, are being challenged, respectively, by Jon Ossoff, a 33-year old owner of a small investigative media firm, and Rev. Raphael Warnock, 51, and senior pastor of Martin Luther King Junior's historic Ebenezer Baptist Church.

And the stakes could not be higher. Democrats are vying for control of the Senate and their ability to control the legislative agenda of a Joe Biden administration. As Senate Democratic Leader Chuck Schumer recently stated to a cheering New York crowd, "Now we take Georgia, then we change America!"

The Democrats strategy, however, is questionable at best. Though both Ossoff and Warnock are formidable and well-funded, their progressive roots and the Georgia Democratic Party's more recent sharp left turn will make it difficult to prevail in a state that may be emerging purple but is definitely not deep blue.

Before assessing the Democrats' chances, however, first a bit of background about Georgia's modern political history. With few exceptions, Georgia has elected governors who mixed right of center political leanings with real world pragmatism. These have included Democrats like Zell Miller, who pushed tough on crime sentencing laws and also created the HOPE Scholarship for Georgians to attend state colleges tuition free, as well as recent Republicans like Sonny Perdue and Nathan Deal, who cut spending to balance the budget, but also boosted the state's entertainment industry and international trade, and advanced criminal justice reform. In the US Senate, Georgia has elected respected problem solvers like Democrat Sam Nunn and Republican Johnny Isakson, each of whom enjoyed strong relationships on both sides of the political aisle.

After Republicans took firm control in Georgia in the early-2000s, Georgia Democrats' strategy was to try and rebuild their old coalition with well known names from their once dominant past. In 2014, for instance, they ran Jason Carter, the grandson of former President Jimmy Carter, in the gubernatorial race, and Michelle Nunn, the daughter of Sam Nunn, in a US Senate race.

While these efforts came up short, Republicans' margins at the ballot box did begin to narrow. In 2014, Deal, running for reelection, and Perdue, running in his first senate race, both won -- but with only just under 53% of the vote. The same trend occurred on the presidential level, with President Donald Trump carrying the state with only 51% in 2016, and that's in contrast to George W. Bush's performance in 2004 at 58%.

In 2018, Georgia Democrats, tired of feeling like Charlie Brown and the football, welcomed the stage-left entry of Stacey Abrams, a former State House Democratic leader, into the race for governor. A tough-as-nails progressive candidate and strategist, Abrams had argued for years that rather than trying to coax moderates and conservatives back into the Democratic camp, the path for the party in Georgia was to stake out a clear liberal agenda and energize minority demographic groups to register and vote. In Abrams' opinion, these groups had been underrepresented and neglected in the past. In the 2018 governor's race, she ran a spirited campaign, losing by less than 55,000 votes out of some 3.9 million votes cast.

Due to the national star status recognition Abrams received afterward (she delivered the Democratic response to Trump's State of the Union in 2019), and the continuation of her voter registration efforts through her organization Fair Fight, she set the progressive tone for Georgia Democrats this election cycle.

In the Democratic primary to take on Perdue, Democrats and their deep-pocket donors cast aside more establishment-centered candidates, like former Columbus Mayor Teresa Tomlinson, in favor of the upstart Ossoff, who enjoyed the solid backing of the late civil rights icon Congressman John Lewis and other Georgia progressives, such as Rep. Hank Johnson. Similarly, in the chaotic 20-person race to fill the remainder of Isakson's term, progressives aggressively sought to clear the Democratic field for Warnock, who from the pulpit and the campaign has laid out a clear left-leaning agenda.

But while progressives clearly have significant control of the Georgia Democratic Party, can they win a statewide US Senate election?

Abrams and her supporters point to their voter turnout efforts to take advantage of demographic shifts, though other factors have also played prominent roles in the party's recent presidential success. While Trump holds enormous support in many quarters of the Republican Party, he does not sit well with many traditional, moderate and even conservative suburban voters who showed their displeasure against many Republican candidates in 2018 when he was not on the ballot and then directly against the President himself this year when he was.

In addition, Biden, despite his claims in this year's very liberal Democratic primary to being a "progressive," is still generally perceived by voters as a moderate Democrat, arguably the first to be viewed as such by voters since President Bill Clinton in 1992 -- the last Democrat to win in Georgia -- giving swing voters a perceived safe-haven alternative to Trump.

Further, while Biden did narrowly win Georgia, his coattails proved noticeably short and a hoped-for progressive blue wave did not materialize downballot. Despite Democrats' expectations in October, Ossoff trailed Perdue by 88,000 votes (and captured 100,000 fewer votes than Biden) and Warnock -- even with a significant financial edge over all the other Democrats in the field, universal Democratic establishment support, and a brutal election brawl between Loeffler and her main Republican opponent Rep. Doug Collins -- made an anemic showing with only 33% of the vote. Other state races for Democrats also proved disappointing, with Republicans continuing to hold the state legislature by wide margins.

Finally, with all due respect to Schumer and his boast, Georgia has a history of fearing giving Democrats too much power when they are in the White House. After Clinton's victory in 1992, Georgia elected Republican Paul Coverdell in a general election US Senate runoff. In 2008, after President Barack Obama was elected, Georgians comfortably reelected Republican Saxby Chambliss in a similar runoff.

Therefore, while Republicans have their own problems and challenges, the Democratic progressive strategy in this runoff is risky at best.