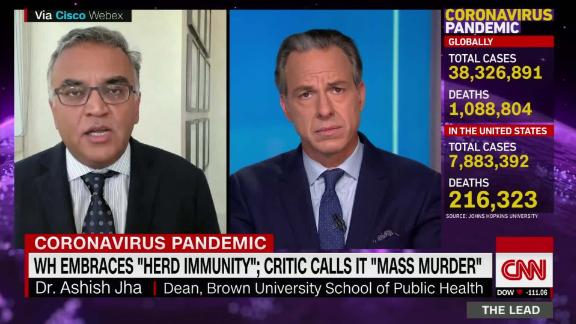 As if Donald Trump's irresponsibility was not already a national tragedy, the White House seems now to favor a controversial approach to Covid-19 that threatens to bring nothing less than mass suffering.

More than 216,000 Americans have already died. Yet on Tuesday, senior Trump administration officials said that they were receptive to pursuing "herd immunity," an approach touted by a group of scientists who have put out what they call the "Great Barrington Declaration." The idea is that the federal government should let the pandemic run its course until most of the population is infected and has ostensibly developed antibodies to ward off future infections. Typical estimates hold that 70% or more of the population would thereby become infected.

According to this idea, vulnerable groups would be targeted for "focused protection," for example, introducing extra precautions such as frequent Covid-19 testing to avoid infections of the elderly living in nursing homes. The rest of the population "should immediately be allowed to resume life as normal," according to the declaration.

This approach runs strongly against the overwhelming consensus of public health specialists, including Dr. Anthony Fauci, the director of the National Institute of Allergy and Infectious Diseases. The new Covid-19 approach would undoubtedly add massively to the suffering in the US in a very short period of time.

The idea that we should not try to control infections other than of vulnerable groups is based on a complete misunderstanding of the real choices facing the US -- or facing any country for that matter. The core mistake is the belief that the only alternative to an economic shutdown is to let the virus spread widely in the population. Instead, a set of basic public health measures is enough, as many other countries have shown, to control the spread of the virus. The proper measures include widespread testing, contact tracing, isolating of infected individuals, wearing face masks, physical distancing, and barring super-spreader events (like Trump rallies). South Korea has exemplified this policy approach, as have many of its neighbors in the Asia-Pacific region.

Sadly, this very basic information seems not to have reached the White House or been understood by it, even though experts already knew in April that the Asia-Pacific region was suppressing the pandemic through these public health measures, and without the need for comprehensive lockdowns (or with only brief lockdowns to give time to scale up the public health measures). By suppressing the virus, these countries have limited the economic fallout.

Indeed, according to the IMF's new report, China, which has broken the pandemic by means of public health control, will achieve positive growth of GDP 1.9% this year, compared with America's expected GDP decline of 4.3%. The Trump team is so obsessed with their anti-China propaganda that they utterly refused to learn from China's success in cutting transmission of the virus enabling an economic rebound. Trump and his team have also refused to learn from similar successes in Australia, Japan, New Zealand, and South Korea, all of which have very low transmission of the virus.

The herd immunity approach is a nightmare for four reasons:

First, according to a study published in The Lancet in late September, fewer than 10% of Americans have so far been infected with the novel coronavirus. Another 60% or so of Americans would likely become infected in a herd immunity strategy. That amounts to around 200 million additional cases of Covid-19 in the United States and countless deaths. This would obviously be wanton madness, since the pandemic can be controlled by low-cost and proven public health means.

Second, there would absolutely be no reliable way to protect vulnerable populations through "focused protection." Many older people do not live in nursing or retirement homes where protective measure can systematically be implemented. And as the CDC has alerted, there are vast numbers of vulnerable Americans who are not among the elderly, but who suffer from medical conditions as widespread as obesity, cancer, kidney disease, high blood pressure, chronic obstructive pulmonary disease, diabetes and others. And in addition to people with prior health conditions, the CDC also points to other groups that need extra precautions: pregnant and breastfeeding women, people with disabilities, people with developmental and behavioral disorders, and others.

For a White House team that can't even properly protect its guests at a White House event, the notion that it could suddenly oversee the implementation of "focused protection" to vulnerable people spread throughout the country in the midst of an uncontrolled pandemic is a fantasy.

Third, the proponents of herd immunity seem to discount the fact that in addition to the acute and short term effects of Covid-19, there are also long-term disease consequences for many, ranging from the Covid-19 "brain fog" to long-lasting damage to many organ systems. The evidence continues to mount that Covid-19 is a frighteningly dangerous disease for many people who survive the infection and in ways that scientists are still coming to understand.

Fourth, it's especially ill-timed to let the pandemic run wild when the White House is touting a vaccine as being just around the corner. If a reliable and safe vaccine will soon be available to protect citizens, surely there is overwhelming reason not to become infected now, but rather to stay safe until the vaccine arrives.

Trump's utter ignorance has already resulted in unprecedented suffering, and the latest bad idea would gravely multiply the damage. If implemented, a herd immunity strategy might just be the most reckless action by the White House yet.

Pregnant woman injured during car crash on CR 39 in Waterloo