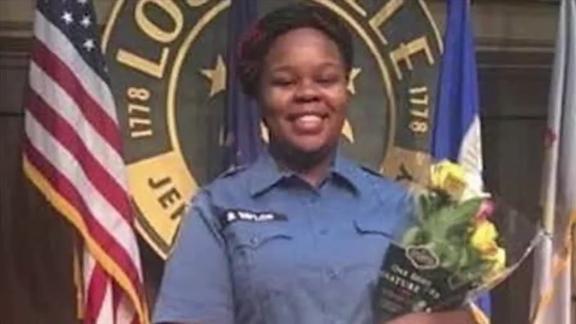 After 195 days, no officer has been arrested or charged for killing Breonna Taylor.

Wednesday's grand jury indictment of former Louisville Det. Brett Hankison hasn't brought justice for the death of Breonna Taylor. Hankison was charged with first-degree wanton endangerment charges because, prosecutors say, bullets from his firearm entered a neighboring apartment where three residents were home. In truth, this has changed nothing.

Justice feels like the elusive carrot that is dangled but never caught.

Consider the fact that Hankison was charged for shooting in the manner that could have killed someone.

No officer has been charged for the fact that someone actually did die.

Here's the apparent logic behind that decision:

Sgt. John Mattingly, Det. Myles Cosgrove and now-fired Det. Hankison executed a warrant on Taylor's residence. Her boyfriend, Kenneth Walker, inside the home at the time, feared they were the victims of a home invasion when the officers banged on the door but, according to Walker, didn't respond when Taylor asked "Who is it?" before breaking down the door.

As the front door was broken down, Walker fired one shot at the first person to enter the apartment, hitting Mattingly. Mattingly and Cosgrove, returning fire in the direction of Walker, shot six and 16 times respectively, Kentucky Attorney General Daniel Cameron said. Hankison, meanwhile, indiscriminately and, according to interim Louisville Police chief Robert Schroeder, "blindly" fired 10 rounds into the apartment.

Collectively, the three officers fired more than 30 rounds. Cameron, citing medical evidence obtained by his team, said that six bullets struck Breonna Taylor, with one being fatal. Taylor was in the hallway with Walker when she was struck. Prosecutors could not determine who fired the fatal shot or if Hankinson ever shot Taylor, but ultimately concluded that Mattingly and Cosgrove were justified in their use of force and would not be charged in Taylor's death. Hankison's attorney has declined to comment.

It turns out, it didn't matter which one fired the fatal shot because the prosecutors concluded that the officers were entitled to use lethal force because they had first been shot at. The state attorney general doubled down on this during Wednesday's announcement, saying that Mattingly and Cosgrove were justified in their response under Kentucky law.

But an evaluation of a use of force case requires more than a distillation of provocation. It requires an evaluation of the reasonableness of the amount of force used, and whether the officers used more force than was necessary to neutralize the threat. We are left without insight into whether that evaluation was made, let alone contemplated, and whether the logic was guided by the same benefit of the doubt afforded to police officers in officer-involved shootings but denied to civilians accused of similar actions.

In any event, the reasonableness evaluation would be far more appropriate in assessing the use of force against Walker, not Taylor.

The fact that Taylor, who neither held nor fired a gun at the officers, was the ultimate recipient of that lethal force underscores the true tragedy. Disturbingly, it seems her death was summarily dismissed as collateral damage.

The mere phrase "collateral damage" evokes a visceral reaction. But so does the realization that they decided to prosecute an officer for prospective loss of life, but none of the officers for the actual loss of life. It confounds the mind as much as the soul.

But until there is a judicial reassessment of how we evaluate the reasonableness of an officer's use of lethal force, it is justice that will end up being collateral damage.

Thursday will be 196 days since Breonna Taylor was killed inside of her home.

And still, no officer has been charged for her death.

One dead after cyclist hit by car in Fort Wayne