The real reason Trump wants to talk about Pelosi's hair 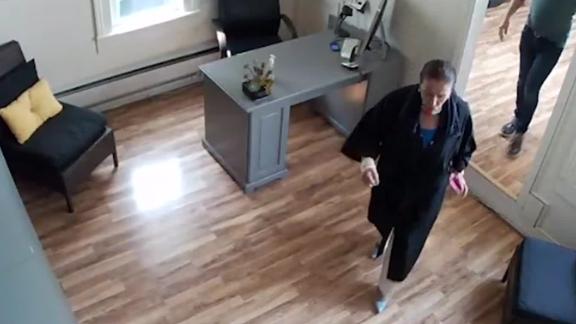 House Speaker Nancy Pelosi got her hair styled inside a San Francisco hair salon, her office said in a statement, an apparent violation of the city's Covid-19 safety regulations that enraged the salon's owner.

While President Donald Trump is threatening American democracy, fueling violence and strife, and continuing to make the US an outlier in coronavirus cases and deaths, he and his GOP minions want us to focus on Nancy Pelosi's hair.

Yes, the Speaker of the House did something selfish and stupid: She got her hair done inside a San Francisco salon, in violation of that city's coronavirus rules, and walked, maskless (according to security footage obtained by Fox News) from one room to another apparently after getting her hair washed. (The Speaker's staff insist she wore her mask at all other times during her hair styling and had gone inside as a result of incorrect information from someone at the salon about what was allowed by brand-new city regulations.)

Whatever the reason for the snafu, Pelosi should publicly apologize, and her actions certainly merit admonishment.

But it is truly something to see the GOP and the President scold her, given their own massive failures and repeated, reckless risk-taking. Recall that when Ted Cruz did a similar thing -- got his hair cut at a Texas salon whose owner had been jailed for refusing to close -- Trump expressed his support for the salon.

In fact, the President has repeatedly encouraged businesses to open, favoring the lifting of restrictions as opposed to the implementation of the kinds of rules San Francisco adopted.

This would lead one to believe that the President isn't earnestly concerned that Pelosi endangered others with her trip to the salon. Instead, he seems to be grasping at this incident to distract the nation from his own disastrous inability to do his job. So, while Trump tries to divert our attention, let's look at some of the recent derelictions of duty:

He has still refused to adequately admit and combat the devastation of the coronavirus, which has killed more than 184,000 Americans and is on track to be one of the country's leading causes of death for 2020, according to the US Centers for Disease Control and Prevention. Based on the top causes from 2018, the most recent year available, Covid-19 ranks third behind heart disease and cancer, CNN reports.

His catastrophic failures have pushed the country to the brink of economic devastation and made the US a pariah state: Americans are mostly trapped within our own borders, considered such a threat to global health that we are banned from traveling to a number of countries.

He continues to spread deadly disinformation about the virus. On Sunday, he retweeted a false claim from a QAnon conspiracy theory supporter (a tweet that Twitter later removed) claiming that only 6% of Covid-19 deaths were actually the result of the pandemic disease. Utterly false, according to his administration's own health officials. And very often Trump refuses to follow the advice of public health experts and the pleas of local officials. He held an indoor rally in Tulsa, Oklahoma, in June despite warnings that coronavirus transmission risks would be high at such an event. Indeed, the director of the Tulsa Health Department, Dr. Bruce Dart, said the rally "more than likely contributed" to the 500-plus Covid-19 cases that erupted there in the weeks that followed the rally.

Trump supporter and former presidential candidate Herman Cain attended the rally; whether his death from Covid-19 six weeks later was directly linked to the event can't be known (Cain had earlier counseled mask-wearing on his website) but when it came to events with the President, Cain appeared to toe the Trump line. ("Masks will not be mandatory for the event, which will be attended by President Trump. PEOPLE ARE FED UP!" Cain's Twitter account posted in a tweet ahead of Trump's Mt. Rushmore event -- the tweet appears to have since been removed.)

And we all just watched the Republican National Convention with more than 1,000 people packed in shoulder to shoulder to watch Trump speak -- very few wearing masks, all put at risk by this irresponsible President.

In addition to the coronavirus, the President is also sowing chaos and discord over issues of racial justice the nation over. He touched down in Kenosha, Wisconsin, Tuesday, disregarding the pleas of local officials to stay away; the hostile, conspiracy-mongering President's visit, they feared, would toss a match on a tinderbox.

And, of course, he went anyway.

Kenosha has been roiled by protests and riots after a White police officer shot Jacob Blake, a 29-year-old father. The police shot Blake, who is Black, seven times in the back at close range (he miraculously survived), prompting a civil rights probe by federal investigators. It's the latest in a series of high-profile police shootings and killings that have fueled Black Lives Matter protests across the country all summer long.

Rather than address the pain and legitimate grievance of the demonstrators calling for justice and reform, Trump has used those protests to claim that American cities are anarchist hellholes, rife with destruction and chaos, and somehow characterizes all of that as Joe Biden's America -- even though it is Donald Trump who is President and on whose ineffectual, self-interested "watch" this is occurring. Instead, the President has for years now amplified White nationalists and encouraged armed vigilantes and violence against protesters.

After an armed teenager was charged with killing two people and injuring a third at a protest, the President even appeared to defend him. (Judging by social media accounts believed to belong to the young alleged shooter, he was a follower of Trump.)

Trump is doing what he always does: Refusing responsibility and blaming someone else. It's a remarkable thing to see from any adult, let alone the leader of what was once a powerful, widely respected nation that led the world in science, health and innovation.

Trump doesn't seem to genuinely want peace or even health and well-being for all Americans; he wants power. And he appears to believe that stoking resentment, violence and chaos while claiming to be the President of law and order is the best way for him to hang onto it at a moment in which his own incompetency is clearer than ever.

He believes if we're all talking about Nancy Pelosi's hair, we'll forget to talk about the fact that salons are not open in the first place because people get sick and die because of the contagion he has proved wholly incapable of dealing with.

The question now is whether voters will fall for it.

Allen County Police: Woman killed in crash on US 24 near Bull Rapids Road

Early voting locations in Fort Wayne to expand on October 26