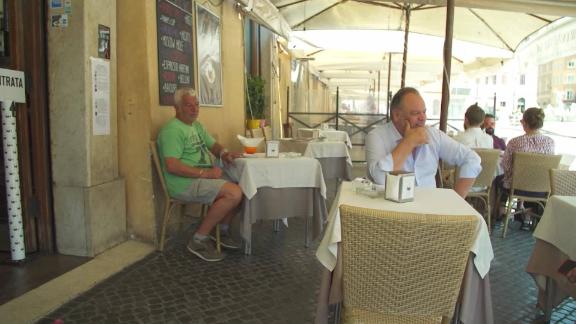 The European Union's decision to bar US citizens from visiting as it reopens its borders to more than a dozen countries could harm European businesses that rely on US dollars to survive. CNN's Frederik Pleitgen reports.

The Canadians will be in Europe this summer, and the Thais and the Moroccans. You might bump into a Rwandan, and no doubt Aussie backpackers will give it a go. If Beijing reciprocates on border openings, Chinese travelers could be on their way, too.

But if you live in the European Union, you probably won't be running into American tourists. The bloc is expected to agree on Tuesday that Yanks will be barred from its member states as the US fights a Covid-19 resurgence.

The move will highlight the failed US effort to suppress the coronavirus pandemic: Charts of new confirmed coronavirus cases on each side of the Atlantic are moving in exactly the opposite direction. Europe's openings could still have the same painful effect that they did in states like Florida, Texas and Arizona. But European states generally imposed earlier, tighter lockdowns than in the US, and mask wearing is not the polarized issue it is here.

If it comes, the EU ruling will be another personal embarrassment to President Donald Trump over his botched management of the pandemic. The President often explodes at perceived slights. But since he's pretty much ignoring the Covid-19 crisis in the US, he might let this one slide. Plus, as the White House has already pointed out, European entry into the US is already suspended.

No-shows by US tourists will hurt the shuttered European tourism industry. Millions bring their dollars across the Atlantic every year, drawn by the continent's history, cuisine and ambience. Italy, France, Germany and Spain welcome the most Americans, according to EU data. But until the two-way flow between the Old and New Worlds is restored, the murmur of admiring visitors in Europe's cathedrals and museums will be missing that certain je ne sais quoi of the overheard American twang.

See you next year, hopefully.

What has Trump learned of statecraft, after hundreds of "highly classified" phone calls and negotiations with foreign leaders? Not much, according to months of reporting for CNN by veteran Washington reporter Carl Bernstein, whose sources in government say there's little evidence that Trump has become more competent with practice. Rather, staffers say the President still refuses to read briefings before calls, boosts himself personally to strongmen like Turkish President Recep Tayyip Erdogan and Russian President Vladimir Putin, and insults female leaders like German Chancellor Angela Merkel as "stupid" and weak.

Among the revelations: Erdogan's timing for calls was so perfect that some staffers wondered if he had access to Trump's personal schedule. And Trump's haranguing of Merkel was "so unusual" that special measures had to be taken in Berlin to ensure that the calls' specific contents remained secret, according to a German official. No wonder staffers grit their teeth when the President's fingers head for the phone.

Spies who love the spotlight

For an intelligence service that is supposed to operate in the shadows, Russia's GRU seems to attract a lot of headlines. The GRU -- formally known as Main Directorate of the General Staff -- has long been accused by the West of orchestrating brazen and high-profile attacks, including the hacking of Democratic Party email accounts during the 2016 US presidential election and the 2018 nerve agent attack in Salisbury, England.

Now the spy agency is again at the center of international attention, after reports that US intelligence concluded GRU operatives offered cash incentives to the Taliban to kill American and British troops in Afghanistan. But strangely, the alleged operation could potentially conflict with Russia's own stated goal to bring warring parties to the table in Afghanistan.

Russia has cultivated contacts with the Taliban and other warring parties in Afghanistan as a way to influence outcomes in a region it considers its strategic backyard. "It's long been known that there were Russian contacts with the Taliban and at minimum some greasing of the relationship with benefits as a hedging technique," says Laurel Miller, program director for Asia with International Crisis Group.

However, she added, an operation to put bounties on US troops would be far more provocative and a "different thing" from its typical behavior. "It conflicts with what Russian official policy is," she said. In other words, the alleged GRU operation targeting US and coalition troops could have blowback: potentially undermining US support for withdrawal, or perhaps prompting fresh sanctions on Russia.

Yet the agency has a reputation for brazenness -- and has operated seemingly opportunistically or independently of official policy before. Andrew Weiss, vice president for studies at the Carnegie Endowment for International Peace, points out that the GRU does aggressively pursue operations that cause diplomatic fallout.

Intelligence experts say the Salisbury poisoning -- which led to the investigative outlet Bellingcat unmasking the alleged GRU operatives through open-source research -- showed a pattern recklessness and overt brutality, rather than a secretive approach to spycraft. And that sent a message to the GRU's enemies.

"That was a pattern we've seen many times in Ukraine," Weiss said, referring to Russian intelligence activities there. "The Kremlin is hardly a well-oiled machine, but time and again, Putin -- either by denying blatant Russian misdeeds or throwing a safety blanket over his security establishment -- does little to improve Russia's international image." -- CNN's Nathan Hodge writes to Meanwhile from London

Trump says he was never briefed about the GRU's alleged bounty scheme. Asked about that by CNN's Jake Tapper, Democratic House Speaker Nancy Pelosi responded, "If they had this intelligence, they should have briefed the President. Why didn't they? Because they know it makes him very unhappy, and all roads for him lead to Putin" -- a phrase she's used before about Trump's Ukraine and Russian election interference scandals.

In fact, intelligence about the apparent plot did appear in one of Trump's daily briefs early this year, a US official with direct knowledge also told CNN on Monday -- and that it was considered serious enough that the National Security Council staff met to discuss "possible response options," including sanctions, if the intelligence developed.

'If I could build a wall around us...I would'

Trump's not the only US leader itching to build a wall. In light of a massive resurgence in coronavirus cases across the United States, New Jersey Governor Phil Murphy said Monday that he wouldn't mind a wall just for his region. "We have lived through hell in this state to get to where we are," he said, referring to New Jersey's battle with Covid-19. "Frankly, I'd never thought I'd say these words, but if I could build a wall around us or around our region I would. But we can't, so we have to rely on personal responsibility and the right behavior, the common sense for the common good." Out-of-state visitors must now quarantine for 14 days after arriving in New Jersey.

Hi: 84° Lo: 55°
Feels Like: 62°
More Weather
The heat and humidity builds into the region as we head into the weekend.