Trump's Tulsa rally was a flop 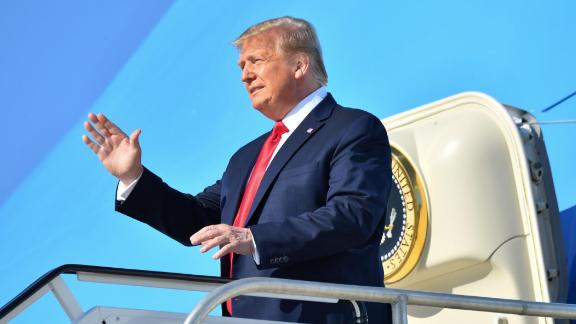 CNN's Brian Stelter talks about the last-minute cancellation of planned remarks by President Donald Trump before an overflow crowd prior to a rally in Tulsa, Oklahoma.

President Donald Trump couldn't wait. His presidency is nosediving, with bad news erupting all around him. His answer was Tulsa, a campaign rally in blood-red Oklahoma, the state he won by a crushing 36 points in 2016.

But Tulsa did not deliver. The event that was supposed to trumpet his return to greatness -- and the country's return to normalcy -- instead brought embarrassing scenes of empty bleachers, a dismantled stage and a familiar speech unsuccessfully trying to reignite public fears.

After raising expectations with claims that a million people had requested tickets for his first campaign rally in more than three months, the vacant seats were the biggest story of the night. It was a bad omen for November, and Trump undoubtedly saw it with his own eyes as he scanned a sea of blue seats devoid of supporters on the top level of the arena that he and his campaign had said would be bursting beyond capacity; so full, they expected, that the campaign planned for a second outdoor speech to bring an additional 40,000 people unable to find a seat indoors.

Instead, the outdoor speech was cancelled, the stage dismantled. The campaign absurdly tried to explain by claiming that protesters blocked the entrances. But every reporter there confirmed that was not true.

Maybe Tulsans weren't dying to see Trump during a pandemic, although many thousands did come, possibly risking their lives to follow a president who showed he doesn't value the health of his supporters enough to follow the advice of health experts. They had urged him to postpone the rally. Oklahoma has seen rising numbers of coronavirus diagnoses in the runup to the meeting, and an indoor gathering of thousands -- most of them without face masks -- may be the best possible way to spread the contagion.

The speech covered mostly familiar terrain, old promises, boring attacks and outrageous statements. The theatrical incitement and divisiveness genuinely energized the crowds when Trump first took to the hustings four years ago. Now it's mostly more of the same. We're used to him now. We've heard it all before.

Still, as with so much that is happening in the world today, we have to remind ourselves how abnormal it all is, to hear a president of the United States threaten violence against Americans and traffic in prejudice.

Speaking of recent anti-racism protests, he warned, "our people are not nearly as violent. But if they ever were, it would be a terrible, terrible day for the other side." It's unclear who exactly "the other side" is. The speech was filled with the usual racist innuendo. He called Covid-19 the racist term "Kung-flu," dog whistled, "they want to demolish our heritage," and spoke of the brutality of gangs, claiming that if Vice President Joe Biden and the Democrats are elected, "our country will be destroyed."

Does anyone really believe that?

The crowds cheered when Trump attacked CNN or China, but it appeared to me that his effort to make them hate Biden didn't elicit quite so much excitement.

The speech was typically self-centered, with a bizarre more than ten-minute long riff on his ultra-slow descent from the West Point ramp, and absolutely no words of compassion for the nearly 120,000 people in this country who have died during the pandemic.

Instead, Trump repeated the lie that coronavirus numbers are climbing because there's more testing, shockingly revealing that, "I said to my people, slow the testing down, please." Experts say testing saves lives. Slowing the testing leads to more deaths. The White House predictably claimed he was joking.

If this was the great comeback, the relaunch of Trump's campaign for re-election, it was a flop, and Trump most likely knows it. Don't be surprised if heads roll in the campaign.

Instead of a showcase for the great enthusiasm Trump is supposed to engender in his supporters, it left quite a different impression.

Not only did we not see the massive crowds we were promised, we saw something else, something deeply disturbing. We saw a president willing to risk the lives of his supporters in order to garner political support. Six Trump staffers organizing the event had tested positive.

Every image of the crowd of tightly-packed Oklahomans holding Trump 2020 signs made one wonder how many among them was breathing in the coronavirus. How many will contract Covid-19; how many will take it home to their relatives, to their neighbors, friends and co-workers? How many will die because of this Trump rally?

Instead of a triumphant relaunch, we saw a president threaten anti-racism protesters, and that started even before the rally.

Instead of a president confident in his achievements, we saw a man in the midst of a string of defeats. We saw a man unable to recognize the depths of the crisis faced by his country.

Trump is in freefall, presiding over the worst public health crisis in a century, the highest unemployment rate since World War II, the biggest sustained protests in decades. He is losing in the Supreme Court; his poll numbers are nosediving. And in the 24 hours before this rally, his administration launched a shambolic effort to push out a prosecutor who is investigating criminal cases targeting people close to Trump. It was a spectacularly incompetent effort, and one that succeeded in making us wonder why Trump wanted to get rid of the prosecutor; one more wound on a presidency that is bleeding its way to the finish line.

If Tulsa was supposed to salve Trump's wounds and send him on his way to victory, it accomplished nothing of the sort. You cannot count Trump out, but he is certainly down.