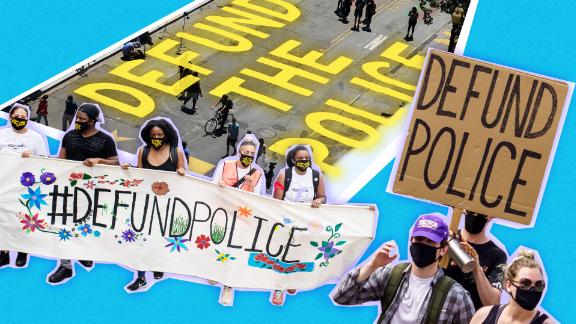 In the wake of George Floyd's death, there is a call across the country to "Defund the Police." Chris Cillizza explains why the slogan could be dangerous for Democrats and detract from the calls for reforming police departments, demilitarization and re-allocation of resources for community building.

Major corporations that have declared support for the Black Lives Matter movement after the police killing of George Floyd are so far reluctant to voice support for the movement's proposal to "defund the police" — a rally cry from the thousands of protesters demanding a national reckoning over police brutality and systemic racism.

Defunding police is a policy effort to divert tax revenue away from law enforcement resources and instead invest those funds in other social services.

In the past, law enforcement leaders, including former Dallas police chief David Brown, have said their officers are too often relied upon to deal with social issues — mental health, social work, drug abuse, school discipline, etc. — that police were never meant to deal with and often aren't equipped to manage.

Some activists just want to reduce the amount of money and resources spent on law enforcement. Others call for disbanding police departments entirely.

Microsoft told CNN Business it is "looking into" responding to a request for comment on the issue of defunding police. That comes less than a day after about 250 of its employees asked Microsoft CEO Satya Nadella to end the company's contracts with law enforcement agencies, according to a letter obtained by the tech and science publication OneZero.

In their letter, the Seattle-based Microsoft employees also condemned their city's police for brutality they said some of them endured recently while participating in protests supporting George Floyd and the Black Lives Matter movement.

"Every one of us ... are either firsthand witnesses or direct victims to the inhumane responses of [Seattle Police] to peaceful protesting," the letter reads, according to OneZero.

Nadella and Microsoft founder Bill Gates have both expressed a desire to take action against systemic racism. Nadella recently told Time.com that "addressing systemic racism, which has impacted opportunities and exacerbated injustices for black and African-American communities, requires an urgent holistic response."

"It starts with having empathy and a shared understanding for the lived experience of others, but it must evolve to intentional action, in our company and in our communities," Nadella said.

On Thursday Microsoft did say it will stop selling facial recognition technology to US police departments, following moves from Amazon and IBM.

In its email response to CNN Business, Microsoft didn't comment on how it plans to respond to its employees' letter.

As it stands, many businesses are showing broad public support for the Black Lives Matter movement, but they are avoiding taking a stand on specific policy initiatives that would help the movement accomplish its goals.

On Monday, the US Chamber of Commerce, a powerful lobbying group that represents 3 million businesses, sent a letter to Congress calling on federal lawmakers to enact policing reforms before Labor Day.

But the US Chamber did not make any specific policy recommendations in its letter. It also declined to comment to CNN Business when asked about the issue of defunding police.

"We won't pretend to suggest that we know exactly how policy ought to be changed to make an impact," the group's executive vice president and chief policy officer Neil Bradley wrote in the letter to Congress. "What we do know is that while no single law can solve our problems, changes in policy can make a difference."

In Minneapolis, where Floyd was killed by a police officer late last month, the city's police chief on Wednesday said his department would withdraw from contract negotiations with the police union -- a move supported by Black Lives Matter and other civil rights activists. The city's chamber of commerce didn't have an immediate response to the decision.

In New York, the Greater New York Chamber of Commerce said it supports both police reform efforts and the Black Lives Matter movement in the group's first statement on the matter since the murder of George Floyd.

More than a week after the Greater New York Chamber of Commerce's president and CEO called for sending in the National Guard to support the NYPD during riots and looting, other chamber leaders are now taking a different tack.

"We are 100% in support of Black Lives Matter," board member Terrance Holliday told CNN Business. "I can't comment about police defunding. I know it's a topic that everybody's talking about. At some point and time folks are going to weigh in."

Greater New York Chamber executive director Helana Natt said she supports diverting resources from policing to other city agencies, but she doesn't support getting rid of the police department.

"You can't disband the police until you have a backup system," Natt said. "You disband police and there's mayhem. And it makes it even worse with the looting and you won't have people relocating into New York City and the economy will tank because of that."

For now, the business world's view on defunding police appears to mirror that of the general public. A YouGov/Yahoo News poll conducted May 29-30 found 70% of Americans now support reforming police departments, but only 35% support reducing police force funding.

Black business leaders may also be conflicted about defunding police.

J. Averi Frost, 34, executive director of the Central Ohio African American Chamber of Commerce, a black business advocacy group, said her members have voiced support for recent protests, even though some of their businesses were damaged or looted by rioters.

But Frost said she couldn't say for sure how her members feel about defunding or disbanding police entirely.

"We've never had this conversation before -- what we would replace the police department with?" Frost told CNN Business. "That has to be an actual thought process. I can't speak to the views and feelings of my membership and say something that unilateral."