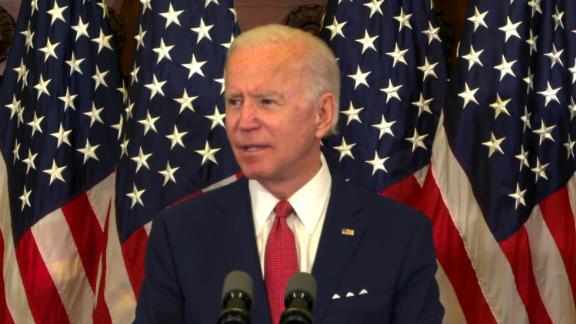 Joe Biden condemns President Donald Trump over the use of smoke canisters against peaceful protesters outside the White House in order to clear a park so that the President could visit a church for a photo opportunity.

Finally, on Tuesday, we heard presidential remarks about the protests against police violence that are roiling the nation.

Too bad they weren't from the actual president.

Former Vice President Joe Biden, the presumptive Democratic presidential nominee, spoke from Philadelphia, Pennsylvania this morning, a city -- like many across the country -- where thousands have been taking to the streets to protest the latest death of an unarmed black man in police custody: George Floyd, who died after a Minneapolis police officer dug his knee into his neck for more than eight long minutes.

Biden's speech could not have distinguished him more from President Donald Trump. While Trump seems to think chaos benefits him and acts to drive it at any turn, Biden struck a markedly different tone, issuing a call for calm, reconciliation, and understanding. "We're a nation in pain," Biden said. "We must not let our pain destroy us."

In a pointed critique of the President, who has long refused to take responsibility for any of his actions and never accepts blame -- even when his failed response to a pandemic has left more than 100,000 Americans dead -- Biden said, "I'll do my job and take responsibility. I won't blame others. I'll never forget that the job isn't about me."

Whatever you think of Biden -- and he wasn't my pick for the Democratic nomination -- it was almost startling to hear from an empathetic, rational adult who understands he's asking to be the public's most prominent servant, not its petty disciplinarian.

It was a window into what a Biden presidency might look like: Hardly the stuff of progressive dreams, but also leaps and bounds better than the current nightmare of narcissism, division, and autocracy from a President primarily concerned about his ratings and anyone he perceives to have slighted him. Biden promises to listen, lead, and to try to do right by the whole country, not just the angry few who don red hats and shout the loudest at political rallies.

He may not be offering the kind of enormous progress voters like me crave. But he does promise to pull us back from the abyss.

He delivered his remarks from City Hall in a metropolis where, like so many others across the country, police have been escalating their response to protesters, sometimes tear gassing even those peaceably assembled, beating people with nightsticks and shields, and attacking and arresting journalists -- including the Philadelphia Inquirer's Pulitzer Prize-winning reporter Kristen Graham.

These increasingly violent tactics have been sanctioned by Trump, a pathetic coward who responded to a night of protests in Washington, DC, by hiding below ground in a White House bunker, and who on Monday evening staged a photo op of his supposed bravery walking out onto the streets of the capital -- after he had police use tear gas, flash grenades and rubber bullets to clear all the peaceful, and mostly young, citizen protesters away.

Standing in the Rose Garden he gave what will go down as one of the most terrifyingly authoritarian, anti-American screeds in US history. Law enforcement, he said, would "dominate the streets." If city and state leaders didn't squash protesters, Trump said, he would send in the military to do it for them. It was the kind of rhetoric you might be familiar with if you've ever heard a tin-pot dictator trying to put down a righteous mass movement against him. Then he walked to a venerated DC church, where he stood with aids, held up a Bible and said, "We have the greatest country in the world."

Bishop Mariann Edgar Budde of the Episcopal Diocese of Washington told CNN's Anderson Cooper that she was "outraged" at the President's exploitation of her church, St. John's Episcopal, to share "a message antithetical to the teachings of Jesus."

"The President did not pray when he came to St. John's, nor as you just articulated, did he acknowledge the agony of our country right now," she told Cooper. "And in particular, that of the people of color in our nation, who wonder if anyone ever -- anyone in public power will ever acknowledge their sacred words. And who are rightfully demanding an end to 400 years of systemic racism and white supremacy in our country. And I just want the world to know, that we in the diocese of Washington, following Jesus and his way of love ... we distance ourselves from the incendiary language of this President. We follow someone who lived a life of nonviolence and sacrificial love."

"I just can't believe what my eyes have seen," she said, surely echoing the sentiments of every decent American who holds the First Amendment's protections in the high esteem they deserve.

I'm not exactly a Biden superfan -- in my ideal universe, we would have a farther-left presidential nominee who stood shoulder to shoulder with the protesters and issued a more radical clarion call for justice.

But I'm not the person Biden needs to convince. He's talking to the vast middle of American voters who may endorse the fundamental message of the demonstrations, but are dismayed by property destruction; who are more inclined to focus on burning cars and broken windows than the enormous majority of peaceful demonstrators; and who support police officers.

I think those folks too often are distracted and misguided. But still, they vote -- and they are among those who will determine this election. Democrats need a leader who both stands with protesters speaking out against racist abuse and sends more moderate voters a clear message: I will be the president of stability and decency; Trump is the candidate of chaos and hate.

Biden did just that. "I won't traffic in fear and division," he said. "I won't fan the flames of hate."

And he pointed to Trump's shameful dictator cosplay: "when peaceful protestors are dispersed by the order of the President from the doorstep of the people's house, the White House -- using tear gas and flash grenades -- in order to stage a photo op at a noble church, we can be forgiven for believing that the president is more interested in power than in principle."

Importantly, Biden also voiced his support for legislation to regulate some of the most dangerous policing tactics: outlawing police chokeholds, ending the transfer of military equipment to police, and creating a national police oversight commission.

Did Biden address the totality of the solution in his brief remarks Tuesday? Not even close. Were the content of his remarks, and the gravity with which he delivered them, far, far better than the tear gas-'em-and-beat-'em strategy endorsed by Trump? Yes.

Hi: 27° Lo: 7°
Feels Like: 14°
More Weather
Another system on Monday brings more snow and breezy conditions into the region.

Snow and colder end to the weekend

FWPD investigating shooting on southeast side

Police: body of missing Antwerp man believed to be found