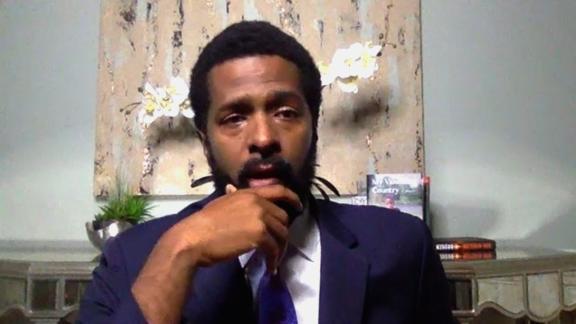 CNN political commentator Bakari Sellers reacts to the death of George Floyd after he was pinned down by police in Minneapolis.

That's the sweetest name in the world to me. Ever since I was three, I yearned for that title and privilege. Year after year during my childhood, I asked for the same Christmas presents -- a doll, a stroller, a set of dishes. I wanted a way to show my child the world and introduce the world to my child. When I got my dishes and doll, I crafted elaborate table settings for my mud pie meals so the "baby" would know how much I treasured her.

Years later, I'm blessed to have become Mama. Drew, my black son, my gift, knows I cherish him. He's a grown man who has made a documentary in Israel, snorkeled numerous foreign waters, toured the US. And always, he sits at the head of the table for any large family gathering -- graduations, birthdays, going away parties and all holiday meals like Thanksgiving or Christmas -- and prays over the food placed on a set of china selected to match the mood and party décor.

So he was who I thought of when tears burst from my eyes listening to George Floyd, a man in Minneapolis. His final minutes in the custody of the police were captured in a devastating video, as he screamed "Mama." Floyd was pleading with the officers -- one of whom held a knee to his neck -- that he couldn't breathe, to the growing alarm of bystanders, one of whom recorded the scene. Floyd's mother is deceased. But in his cry -- "Mama!" -- I heard a twisted combination of hope and horror. Hope because in that moment he hoped the person who gave him life could save his life even in death. She'd undoubtedly done it before when she was alive. And horror because that's never how a black mama wants to hear her sacred title.

It's an unwavering declaration of faith. Whether they are three, 12, 20 or 46, like Floyd, children yell it when they're excited, proud, threatened or in pain. The child is certain of the response. Mothers often know instinctively by the tone and timbre of voice which it is, and while they're running toward that sound, they're already forming a plan for what to do to help.

I've heard that sound of panicked hope and belief that I could, and would, solve all problems and heal all wounds. I've heard it whimpered at my bedside at 2 a.m. just before a small clammy palm touched my face and a 3-year-old threw up on my hair and pillow. I've heard it summon me when window-rattling thunder rocked the house and tethered my son to his bed with so much fear that he couldn't make the short run to my room.

After tumbles from merry-go-rounds, while he gripped my hand waiting for the meds to relieve the dizzying pain from having four stubborn wisdom teeth removed, and most recently when the flu landed him in the hospital, and I was 1,000 miles away -- I heard it. I came running.

I heard Floyd scream "Mama," and through my tears, even though I knew the events in the video had already unfolded to a tragic conclusion, I was still ready to fight. He wasn't my baby, but he was someone's child. And he needed someone with a mother's love to help him.

Over the years between my son and me, "Mama" has become "Mom," and his squealy voice has transformed to a deep heaviness that rivals Barry White. At 20 years old and 6 feet tall, his voice isn't the only thing that's different. The meaning and tone have changed. When he calls me "Mom," it's protective. There's a question mark behind it when he finds me on the condiments aisle talking to a strange man who's looking for dry mustard in the wrong place. "Mom?" It's a "Who is this man, are you okay and why is he talking to you?" Sometimes, it's annoyed, exasperated and deadpan. "Mom." As in: "Haven't I told you that I lift things? I go to the attic. I pump the gas." A couple of weeks ago, it was loud: "MOM!" He bolted down the stairs breathing like a bull, fists clenched, eyes darting, neck on a swivel and ready to fight. While asleep, he had overheard as I was jokingly yelling, "PLEASE! PLEASE! PLEASE!" exhorting a friend on the phone to do something mischievous. But he thought there was an intruder and I was pleading for my life.

In his mind, the roles have changed. He thinks about protecting me. Caring for me. But I'm still and will always be Mama. That's my job.

But I'm tired. I'm tired of being scared for him. I'm tired of reading about Ahmaud, Travis, George and so many others. The list never stops. I need the white mamas to share this burden. I need my white friends to love me and mine enough to come running, too.

My baby calls me every time he's caught being black -- the security officer trailing him in the Harvard museum while he waited for his friend's commencement to start last May. His hands weren't in his pockets. I'd taught him that. His duffle bag was checked. The museum required that. He was in couture slacks and a cashmere sweater. But that white female security officer thought what? I still wonder. That he would break the glass and steal an artifact? And the white woman who scurried away from the ladies' room on his college campus, presumably because he was walking toward her? Wasn't he just going in the same direction to use the adjacent men's room?

While I'm waiting for white mothers to come running, to let me rest for just a moment while they carry the baton for a bit, I have a special thank you for my friend Stacie. I'm blessed with a multi-cultural array of friends. Stacie personifies compassion, sensitivity, godliness and intellect. She knows the world sees and treats her differently because she's white, financially comfortable and socially connected. In her heart, she's just a mama like me. She has an awesome grandson, and she's right alongside his parents shaping his life and praying over him and teaching him to see the humanity in everyone, to value all life as precious. I know she's helping bear my burden.

After the Ahmaud Arbery video surfaced, she texted me. She sees my blackness and the pain it brings. She'd never declare, as too many do, that she "doesn't see color." She sees it because she truly sees me. She knows it shapes how I see the world and how the world sees me. She knows my son, and she authentically cares about him. She knows I'm hurting without my having to tell her. And one mama to another, she cared.

She wrote: "Thank you for raising a Godly young man who makes the world a better place. I have been thinking about y'all with the Ahmaud Arbery horror going on.... What a travesty! That these things still happen and are still covered up, tolerated, swept under the rug, excused in 2020 is heartbreaking. I thank God that you have had the sense to educate Drew to exercise extreme caution and always be aware of his surroundings. He is a treasure, not just to you, but to all who know him, and I pray for his safety, happiness, and the fulfillment of God's purpose in his life. Love you, Mama Friend!"

Stacie hears it. I pray others will, too.

When a woman lost her wallet in a store, a good Samaritan drove to her home to return it