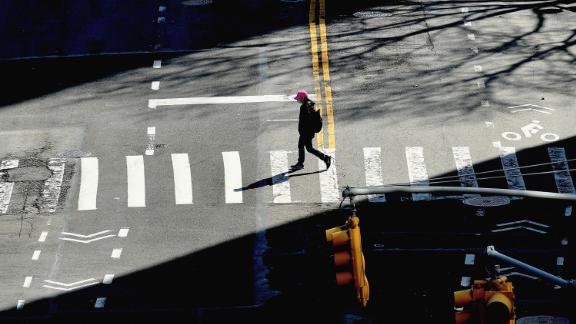 More than 40 million people have filed first-time jobless claims since the coronavirus pandemic forced the US economy to shut down in March.

America's economy fared worse than initially reported in the first quarter, according to the Bureau of Economic Analysis.

US gross domestic product, the broadest measure of the American economy, shrank by an annualized rate of 5% between January and March. A preliminary report estimated the first-quarter economy shrank by 4.8%.

It was the worst performance for the US economy since the final quarter of 2008, when America was in the midst of the financial crisis, and put an end to six years of uninterrupted economic growth.

Much of the decline was driven by a sharp drop-off in consumer spending, especially on elective health care procedures.

Economists had braced for the first-quarter contraction. But the revision shows that the economy was even worse than expected -- despite humming along in January and February before shutting down in March. GDP is expected to contract even more this quarter.

Thursday's revisions were mostly dragged down by inventory numbers that were worse than thought.

Inventories, and investments in inventories, were revised lower, led by revisions in nondurable goods and petroleum products, according to the BEA.

Good news for the second quarter?

That may not be a bad thing.

"While the first quarter was slightly worse than we thought, the decline in the second quarter could be smaller because more of the inventory adjustment had already occurred," said Michael Pearce, senior US economist at Capital Economics.

April orders for durable goods support that thesis. Orders collapsed by 17.2% last month, according to the Census Bureau. The drop was mostly lead by falling orders in the transportation segment including aircraft. But that decline was still better than economists had predicted, which could mean that parts of the American economy were more resilient through the lockdown than initially feared.

That said, the economy is still expected to record a historically terrible quarter between April and June. Expectations hover around a 40% annualized GDP drop, driven by a steep decline in consumption.

This second look at the numbers also included corporate profits, showing that profits from current production declined nearly 14% from the prior quarter -- a decrease of $295 billion between January and March, compared to a increase of $53 billion in the final quarter of 2019. This was the worst decline since the fourth quarter of 2008.

There were some modestly encouraging signs: Final sales to domestic purchasers -- a measure of demand in the economy that is based on consumer spending and private investments -- were revised up. Even though the sales declined, they didn't drop as much as first thought.