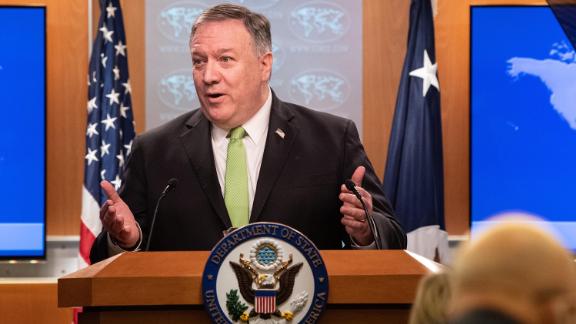 Secretary of State Mike Pompeo has surged into the headlines atop a geyser of revelations so dramatic that they may even help President Donald Trump distract the public from his disastrous pandemic response.

Ironically, Pompeo's scandal was propelled by the efforts of the secretary himself -- and his boss -- to keep it quiet. Their decision to get rid of the man charged with investigating any signs of malfeasance at the State Department has only drawn a spotlight, and the closer we look, the more disturbing Pompeo's actions appear.

Investigations by a number of news organizations allege a pattern familiar in the Trump administration: possible abuse of power for personal gain; disdain and circumvention of accepted procedures, and a propensity to treat a government position as a personal fiefdom with little regard for both the taxpayers' money and common decency.

In short, it looks like Pompeo brought the swamp to Foggy Bottom.

On Wednesday, Pompeo ridiculed what he called "crazy" stories about him, with a satirical summary mocking the reports: "someone was walking my dog to sell arms to dry cleaners," he gibed. The news reports are not so laughable.

For starters NBC News provided detailed evidence of about two dozen luxurious dinners held by Pompeo and his wife Susan at the State Department's Diplomatic Reception Rooms, all paid for by taxpayers, with guest lists made up more of Republican donors and activists than foreign diplomats and policy experts. (Some 39% of the nearly 500 invitees were from Fox News, NBC reported.) But that's only part of the unfolding narrative.

It became apparent late last Friday that something worth hiding was brewing under Pompeo, when Trump announced his intention to fire the State Department's Inspector General, Steve Linick. Inspectors general are Senate-confirmed government officials charged with auditing and investigating potential instances of fraud and abuse in the government.

For that reason, they have come under relentless attack from a president who stands at the center of so many corruption scandals you need a spreadsheet to keep track, paying tens of millions to settle accusations of fraud at his Trump University and found in violation of charity rules at his Trump Foundation (he denies wrongdoing in both cases), to name just a couple in an endless stream. Linick's was the third late-night inspector general firing in six weeks, a slow-rolling Friday night massacre.

Pompeo acknowledged Wednesday that he asked Trump to fire Linick, but offered scant explanation for the reason, other than that it should have happened sooner. He called claims that the firing was retribution for probes into his activities "patently false."

The law requires the President to give 30 days' notice on IG dismissals, so the announcement shot the starting gun on Congressional investigations into Linick's firing.

Moments after the announcement, Democratic Rep. Eliot Engel -- chairman of the House Committee on Foreign Affairs -- dropped the first bombshell, revealing that Linick was investigating Pompeo. Engel, with Sen. Bob Menendez, ranking member of the Senate Foreign Relations Committee, opened a probe into the ouster, decrying "the politically-motivated firing of inspectors general and the President's gutting of these critical positions." Later, NBC reported that Linick was investigating Pompeo's use of a State Department political appointee to conduct personal errands, such as walking his dog and picking up his laundry.

Within hours, the accusations grew more disturbing. Engel told CNN of another possible reason for Linick's firing. The inspector general, it turns out, was investigating the declaration of an "emergency" that Pompeo had cited one year ago as reason for bypassing the requirement that Congress approve an $8 billion sale of weapons to Saudi Arabia.

Engel, who called the declaration "phony," said Linick was conducting an investigation of it at his office's request. The New York Times reported that Pompeo had already answered written questions into that probe.

The NBC investigation identified the dog-walking staffer, whose name appeared in the emails NBC reviewed in connection with the so-called Madison Dinners. The staffer was the principal liaison between Pompeo's office and the protocol office that organized the dinners. "Two administration officials told NBC News that Linick made some type of inquiry to the protocol office last week, before he was fired," NBC reported. "One of the officials said Pompeo's office was then notified." Was Linick also investigating Pompeo's dinners? That remains unclear.

Even if he was not, Americans will find the details fascinating and more than a little disturbing. The events, with their own logo embossed on State Department invitations, brought hundreds of people to the center of US diplomacy more than 20 times since Pompeo became Secretary of State.

Pompeo's spokeswoman, Morgan Ortagus, told NBC that the dinners were an "opportunity to discuss the mission of the State Department and the complex foreign policy matters facing our exceptional nation." But the guest list more closely suggests an opportunity to further a political career within the Republican establishment.

The majority came from the corporate world and conservative media and entertainment, along with Republican -- only Republican -- members of Congress. Among those wined and dined -- and sent home with custom-embossed party gifts -- were Fox News' Laura Ingraham, Marjorie Dannenfelser, head of a prominent anti-abortion lobbying group, Bill Miller, head of a leading casino lobbying group, former Major League Baseball Commissioner Peter Ueberroth, Chick-fil-A Chairman Dan Cathy, a leading conservative donor, and others, in a detailed mailing list reviewed by NBC.

Sources told NBC that the State Department collected information about each guest, and that information was all forwarded to the private Gmail account of Susan Pompeo, the Secretary of State's wife. Whatever reason she had for receiving the data, it amounts to a treasure trove, should the Secretary of State decide to run for a Kansas Senate seat -- or for President. If that is the purpose of the dinners and the emailing, it is a violation of the Hatch Act, which bans most federal employees from using their position for partisan political activities.

You may recall, by the way, the time a Trump-appointed federal watchdog, loyal conservative Henry Kerner, advised the President to fire adviser Kellyanne Conway for violating the Hatch Act. For his trouble he was smeared by Congressional Republicans at a hearing on the matter. ("Let me know when the jail sentence starts," Conway cracked to a reporter. Trump called Kerner's assessment flawed, said "it seems to me very unfair," and that he had no intention of firing Conway.)

One of the most distinctive and harmful traits of the Trump administration is its disdain for ethics and integrity in government. But another, is its pattern of leaving political appointees stained, their reputation in tatters, a prospect that should worry Pompeo.