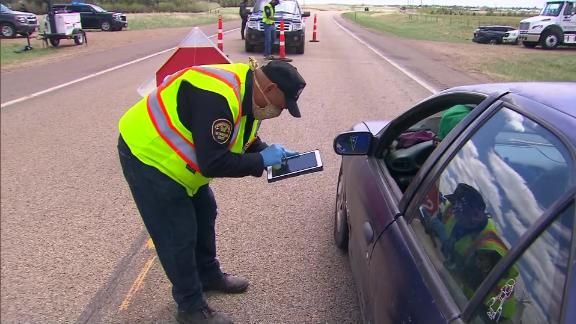 The Cheyenne River Sioux Tribe in South Dakota is refusing to end coronavirus checkpoints declared illegal by the state's governor, saying they are the best tool they have to stop the virus from spreading. CNN's Sara Sidner reports.

Posted: May 14, 2020 10:11 AM
Posted By: By Sara Sidner, Leslie Perrot, Artemis Moshtaghian and Susannah Cullinane, CNN

The Cheyenne River Sioux Tribe in South Dakota is refusing to end coronavirus checkpoints declared illegal by the state's governor, saying they are the best tool they have to stop the virus from spreading.

Gov. Kristi Noem sent letters Friday to the leaders of the Oglala Sioux and the Cheyenne River Sioux tribes demanding that the checkpoints along the US and state highways through tribal land be removed.

Her office released an update Sunday clarifying the request: "The checkpoints on state and US highways are not legal, and if they don't come down, the state will take the matter to Federal court, as Governor Noem noted in her Friday letter."

Cheyenne River Sioux Tribe Chairman Harold Frazier told CNN that the main purpose of the checkpoints set up by the tribe is to monitor and try to track coronavirus if it should ever come in to tribal lands.

"We want to ensure that people coming from 'hot spots' or highly infected areas, we ask them to go around our land," Frazier said.

When asked about Noem's request that the tribe take down the checkpoints as they "interfere with regulating traffic on US and state highways," Frazier said that they're going to stay put.

"With the lack of resources we have medically, this is our best tool we have right now to try to prevent [the spread of Covid-19]," Frazier told CNN. Frazier said that reservations are ill-equipped to deal with a coronavirus outbreak adding that, "the nearest health care, critical care is three hours away from where we live."

Sunday's letter written by Gov. Noem's Policy Director, Maggie Seidel, points to a memorandum pertaining to road closures on tribal lands issued by the US Department of the Interior's Bureau of Indian Affairs, written on April 8.

The memorandum states that tribes "may restrict road use or close" tribally-owned roads temporarily without first consulting with the Secretary of the Interior or private landowners under conditions involving "immediate safety or life-threatening situations," like the pandemic.

But it says tribes can only restrict access over roads owned by others such as state governments "on behalf of the affected road owner after the tribe has consulted and reached an agreement addressing the parameters of the temporary road closure or restrictions."

Seidel says no consultation has taken place and no agreement reached, saying "the memorandum makes it perfectly clear it is unlawful to interrupt the flow of traffic on these roads."

In Friday's letter, Noem said "we are strongest when we work together; this includes our battle against Covid-19."

'Save lives rather than save face'

Frazier said in a news release Friday that while he agreed it's important to work together, "you continuing to interfere in our efforts to do what science and facts dictate seriously undermine our ability to protect everyone on the reservation."

"Ignorant statements and fiery rhetoric encourage individuals already under stress from this situation to carry out irrational actions," he said. "We invite you to join us in protecting the lives of our people and those that live on this reservation. I regretfully decline your request."

The purpose of the tribe's actions, Frazier said, is to "save lives rather than save face."

CNN has also reached out to the Oglala Sioux Tribe for comment but has not heard back.

According to Cheyenne River Sioux Tribe checkpoint policies posted on social media, its reservation residents may travel within South Dakota to areas the state has not deemed a Covid-19 "hotspot" if it's for an essential activity such as medical appointments or to get supplies unavailable on the reservation. But they must complete a health questionnaire when they leave and when they return every time they go through a checkpoint.

South Dakota residents who don't live on the reservation are only allowed there if they're not coming from a hotspot and it is for an essential activity. But they must also complete a health questionnaire.

Those from a South Dakota hotspot or from outside the state cannot come to the reservation unless it is for an essential activity -- but they must obtain a travel permit available on the tribe's website.

There are 198 cases of Covid-19 among Native Americans in the state as of Sunday, according to state health department figures. The state has more than 3,500 confirmed cases and at least 34 deaths, according to Johns Hopkins University.